What would have been 50th anniversary of Roe v. Wade sees protests, celebration

What would have been 50th anniversary of Roe v. Wade sees protests, celebration

For the first time in five decades, the anniversary of the Supreme Court's 1973 decision in Roe v. Wade is being marked in a post-Roe world.

On Sunday -- the 50th anniversary of the court's milestone ruling making abortion a protected, constitutional right -- marches are taking place across the country amid uncertainty about the current state of reproductive rights.

On Friday, anti-abortion protesters gathered in Washington, D.C., for March for Life, an annual event that this year carried the theme, "Next Steps: Marching in a Post-Roe America."

In cities across the country Sunday, protestors in support of abortion rights are taking to the streets to promote their version of what a "post-Roe America," should look like one in which abortion access is protected.

Vice President Kamala Harris will spend the 50th anniversary of Roe delivering remarks in Florida, a state that now has a 15-week abortion ban without exceptions for rape, incest or human trafficking. 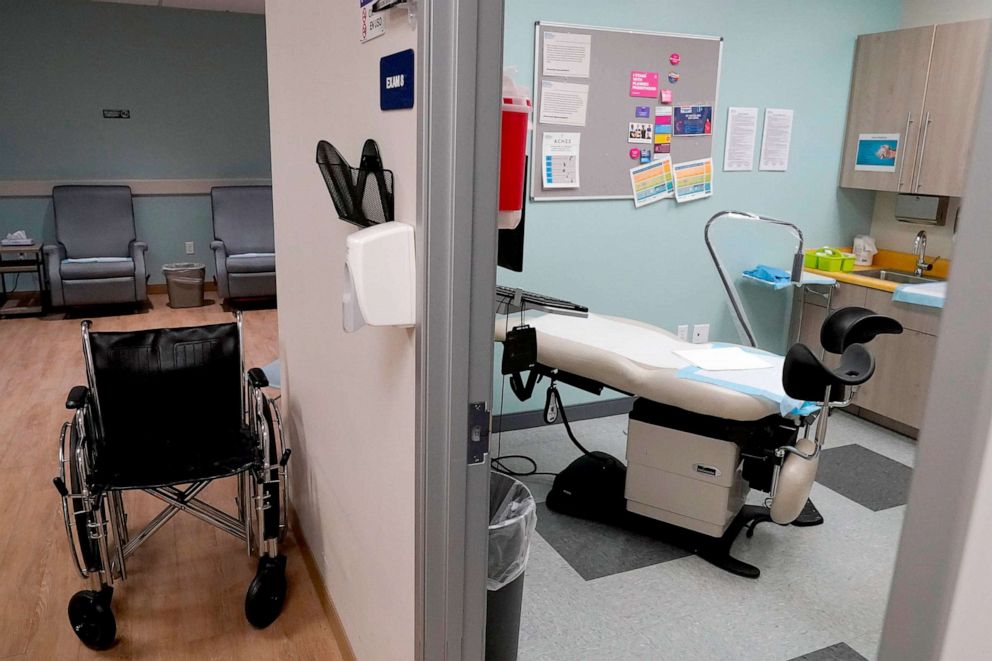 An unoccupied recovery area, left, and an abortion procedure room are seen at a Planned Parenthood Arizona facility in Tempe, Ariz., June 30, 2022.

"It cannot be understated the profound individual, societal, public health impact of what Roe v. Wade stood for," Dr. Deb Bartz, an obstetrician-gynecologist at Brigham and Women's Hospital in Boston, told ABC News. "It was the federal law of the land for 49-and-a-half years. That's an exceedingly long time. The Dobbs decision was a sad situation that allowed states to now dictate for their citizen to what extent full, reproductive health options are available to them."

She added, "I hope that Sunday is a day of celebration, that we can reclaim it. I want it to be a day that I commemorate as an abortion provider all the amazing people that advocated ahead of the decision of Roe and who worked within abortion services during Roe, post-Roe and continue to work here."

What was the Roe v. Wade case that started it all?

In 1969, Norma McCorvey was a 22-year-old woman living in Texas when she became pregnant for the third time. Single and unemployed at the time, McCorvey wanted to have an abortion.

At that time in the U.S., the legality of abortion was based on state's decisions, and in Texas, where McCorvey lived, it was illegal.

In trying to access abortion care, McCorvey was referred to two lawyers, Linda Coffee and Sarah Weddington, who took on her case.

McCorvey went on to become the plaintiff, going by the pseudonym "Jane Roe," in the Supreme Court case that made abortion a federally protected right.

In the case, seven of the court's nine justices ruled that the 9th and 14th amendments to the Constitution protect an individual's right to privacy.

The justices, all men, decided the amendments are "broad enough to encompass a woman's decision whether or not to terminate a pregnancy." 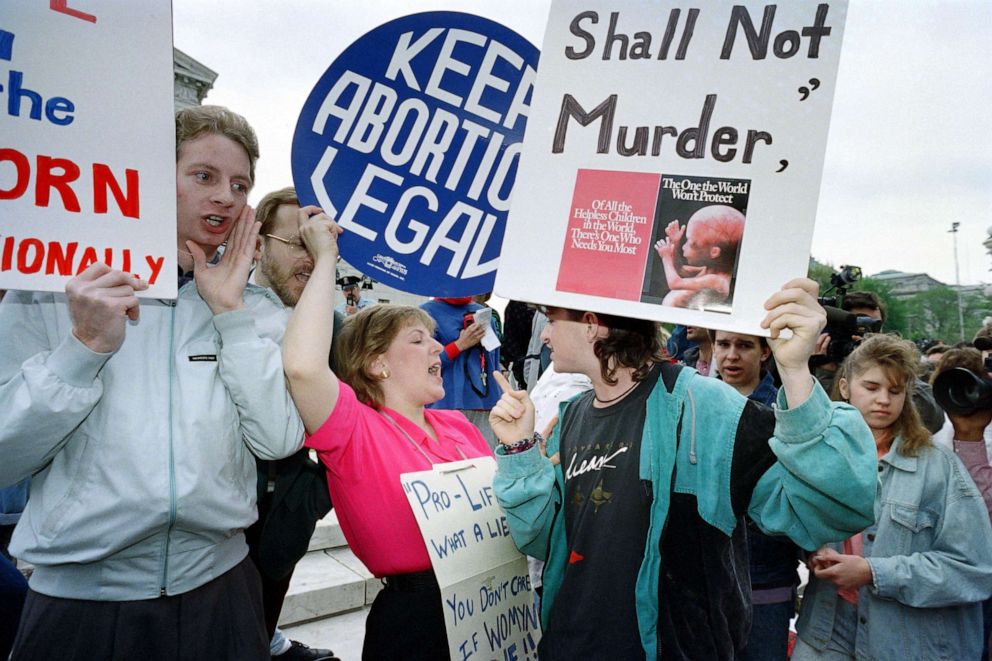 Abortion and anti-abortion activists face off on the steps of the Supreme Court building on April 26, 1989 in Washington, as the court prepares to hear arguements reopening the 1973 landmark abortion case "Roe vs Wade."

By the time the court ruled on her case in 1973, McCorvey, unable to access an abortion, had given birth to a daughter and given her up for adoption.

McCorvey went public with her role in the Roe v. Wade case in the 1980s, becoming an abortion rights activist.

She later switched her position and publicly opposed abortion rights. In 1997, McCorvey formed her own group, Roe No More Ministry, and spoke out against abortion.

McCorvey was remembered after her death as opposed to abortion rights -- until the documentary "AKA Jane Roe" was released in 2020. The documentary included a late-life interview with McCorvey where she said she wasn't actually against abortion.

She claimed she had been paid by the anti-abortion movement to say she was.

Five years after McCorvey's death, in 2021, the daughter she gave up for adoption, a woman named Shelley Lynn Thornton, broke her silence. Prior to that, for more than 50 years, Thornton's identity had been unknown to the public.

Thornton told ABC News' Linsey Davis she never agreed to meet her biological mother in person and has "no regrets" about that, in part because of comments McCorvey had made to the press about alternating between feeling guilty for placing her for adoption and wishing she'd gotten the abortion.

"Too many times has a woman's choice, voice and individual freedom been decided for her by others. Being that I am bound to the center of Roe v. Wade, I have a unique perspective on this matter specifically," Thornton said in a statement via her spokesperson, Raúl Rojas.

"I believe that the decision to have an abortion is a private, medical choice that should be between a woman, her family, and her doctor. We have lived in times of uncertainty and insecurity before, but to have such a fundamental right taken away and this ruling be overturned concerns me of what lies ahead."

Since the Supreme Court's decision, at least 14 states have nearly ceased all abortion services. 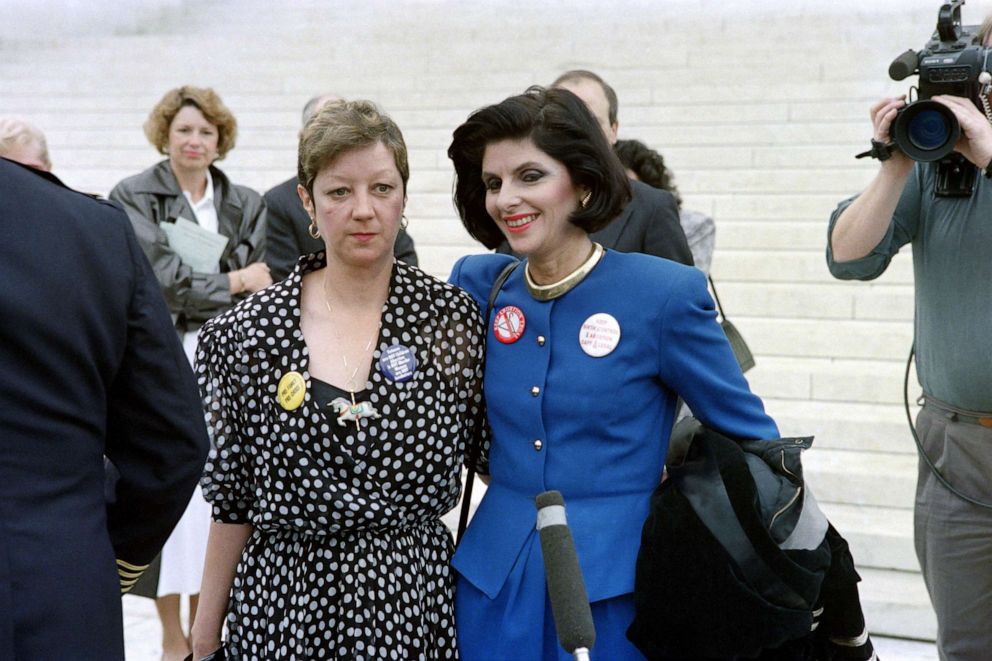 Norma Mc Corvey, known as "Jane Roe" of the 1973 Supreme Court decision Roe v. Wade, left, is accompanied by her attorney, Gloria Allred at the Supreme Court building on April 26, 1989, in Washington, D.C.

Additionally, Georgia has a six-week ban in place and abortion services are not being provided In Wisconsin due to confusion over whether an 1849 law that bans abortion, including in cases of rape and incest, is in effect.

What's more, Florida and Arizona each have 15-week bans in effect as well.

Abortion bans were passed in Indiana, Montana, North Dakota, Ohio, South Carolina, Utah and Wyoming, but have either been blocked due to court proceeding or were overturned by higher courts.

The annual March for Life rally was held in Washington, D.C. for the first time on Friday in a post-Roe world. While anti-abortion protesters have celebrated the Supreme Court's decision, they've also bemoaned that abortion is still being practiced in many states.

On the flip side, leaders in several states have strengthened and protected access to abortion.

"Roe v. Wade, the case, has been overturned, but Roe is not dead," Katie Watson, an associate professor of medical education, medical social sciences and obstetrics and gynecology at Northwestern Feinberg School of Medicine in Illinois, told ABC News. "Roe is something larger than the case. It's also a cultural phenomena that shaped the lives of all American women for 49 years. It's also not dead in the sense that its principles have been carried forward in state legislation and in state constitutional analyses."

"A woman's right to choose is just that -- a woman's, not a politician's," Maine Gov. Janet Mills said in a statement.

In Delaware, Gov. John Carney signed legislation expanding who can perform an abortion, including licensed physician assistants, certified nurse practitioners and certified nurse-midwives with training to "terminate pregnancy before viability."

Additionally, Gov. Jared Polis of Colorado, then-Gov. Charlie Baker of Massachusetts, Gov. Gretchen Whitmer of Michigan, Gov. Tim Walz of Minnesota and Gov. Michelle Lujan Grisham of New Mexico said they will not extradite women who sought abortions or providers who performed the procedure in their respective states.

Baker's and Lujan Grisham's orders also protect providers from losing their licenses or being subject to discipline due to out-of-state charges relating to abortion.

In Washington, Gov. Jay Inslee signed a directive forbidding the Washington State Patrol from cooperating with investigations related to abortion in states with restricted access.

In September, California Gov. Gavin Newsom signed bills that prohibit medical information regarding abortion from being released in response to a subpoena or a request from out of state.

Abortion and anti-abortion activists face off on the steps of the Supreme Court building on April 26, 1989 in Washington, as the court prepares to hear arguements reopening the 1973 landmark abortion case "Roe vs Wade."

Earlier this month, Illinois lawmakers passed a bill shielding abortion and providers from legal action in states where the procedure is legal, according to ABC 7 Chicago, and signed by Gov. J.B. Pritzker.

A report from the Society of Family Planning shows that the number of abortions did decrease in the U.S. overall post-Dobbs, but increased in states without restrictions.

"American women aren't standing still for this. They are not surrendering to this brutal hostage taking effort of their state governments to say, we're going to force you to create another human being against your will," Watson said. "They're literally moving. They're literally getting out of Dodge, and seeking those abortions."

On the federal level, in August, President Joe Biden signed an executive order, directing the Secretary of Health and Human Services to "consider actions" to help protect access to abortion, to "consider all appropriate actions" for doctors who are unsure if they are violating state laws when providing care and to "evaluate the adequacy" of collecting abortion data.

The order does not overrule state laws, nor does it expand abortion access, but it does require members of the Biden administration to further study the matter.

Abortion was on the ballot in five states during the midterm elections in 2022 with voters enshrining abortion rights in their state constitutions in three states and against further restricting access to abortion services in two states.

Voters decided to amend their state constitutions in California and Vermont and added a constitutional amendment in Michigan that grants explicit protections for reproductive rights.

Although abortion is banned in Kentucky, voters rejected a proposed constitutional amendment that would have specified the right to abortion does not exist, nor is the government required to allocate funding for abortion.

In Montana, voters turned down a proposal that would have amended the state constitution to define all fetuses "born alive" as legal persons, including those born after an abortion.

The proposal would have granted any fetus born alive the right to appropriate and reasonable medical care and treatment. Providers who do not give that care would have faced a fine of up to $50,000 and up to 20 years in prison.