Vistara Premium Economy: Is It Worth It?

Vistara Premium Economy: Is It Worth It?

MUMBAI & BENGALURU – Vistara is also the only airline in the country to be offering “Premium Economy,” and I have always been wanting to try out this product.

Fortunately, during a recent sale, I found a very good discount, and I decided to give it a go. So, sit back and enjoy my detailed review of Vistara’s A320 Neo Premium Economy.

Vistara has a user-friendly website/application, and the “Web Check-in” experience was quite seamless. I did not face any hurdles, but still, for some reason, I couldn’t pre-select my choice of meal.

My flight’s original time of departure was 21:30 IST. Still, as there were restrictions on that day (due to the arrival of the Honourable PM of India), all the airlines had issued circulars to plan their journey accordingly.

T2 has some fantastic apron views from the food court, and I had already completed my work in Mumbai, so I reached the airport almost 6 hours prior to departure time. 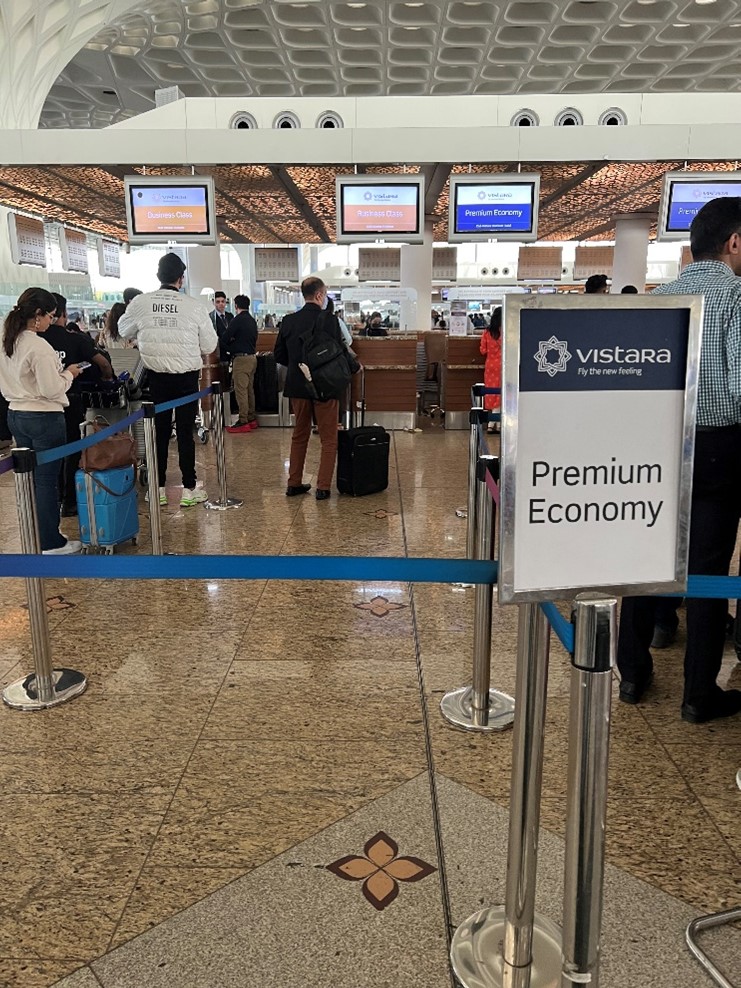 Security check was nothing more than ordinary.

They have enough counters to manage the peak hour crowd and have staff who will guide you towards the section which has fewer passengers. It took me 15 minutes or so to clear and head toward my gate.

Now, as I was 6 hours early, I spent most of my time at the table with an amazing apron view; somewhere around 16:00, I get an SMS alert informing me regarding a delay of almost 2 hours, and now the revised time of departure was 23:10.

I was a bit disappointed, but nevertheless, I ignored it and continued to click some photos of those majestic birds on the apron. 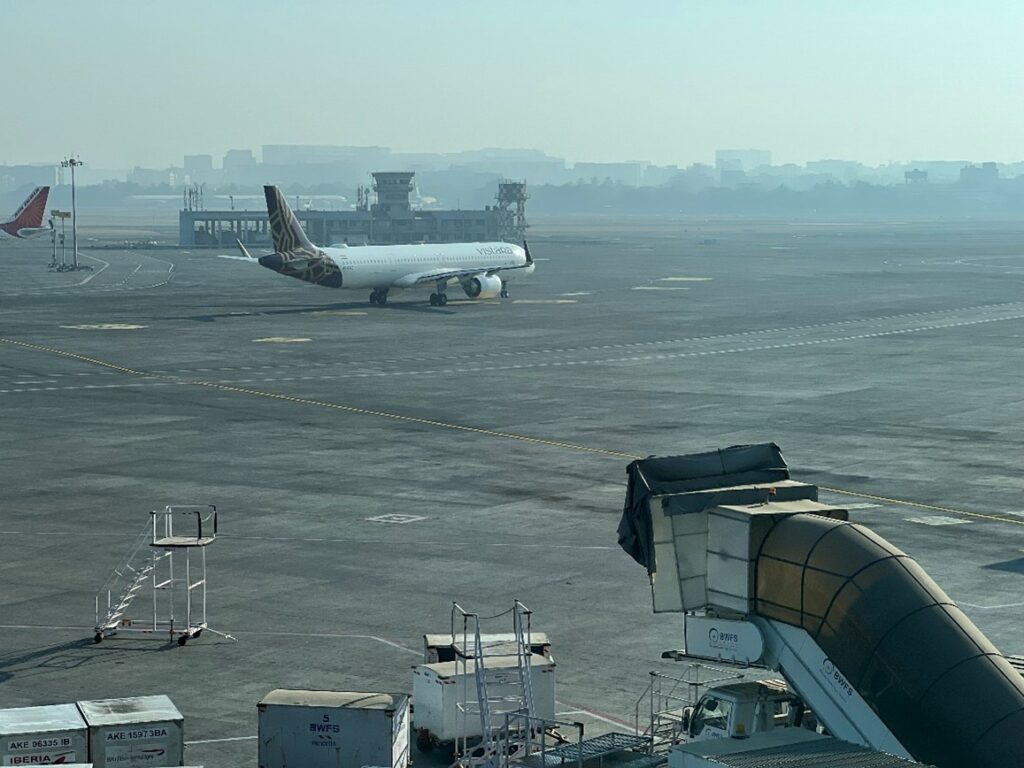 After almost 7 hours, I decided to go towards the gate as there were only 30 minutes or so left for my boarding.

Arriving at the gate, I see another Vistara flight to Hyderabad, which was also delayed, and the passengers were arguing with the ground staff.

After 60 minutes still, there was no update, and the ground staff wasn’t bothered to give us the exact reason for the delay or ETD.

Once, all the passengers got very upset and started yelling at the agents; that’s when they said that the flight is delayed due to bad weather in Delhi and that now ETD was 01:10 (Basically the next day).

They also provided passengers with a food voucher. After a delay of almost 4 hours, the flight finally started boarding. As expected, I got priority boarding along with business class passengers. 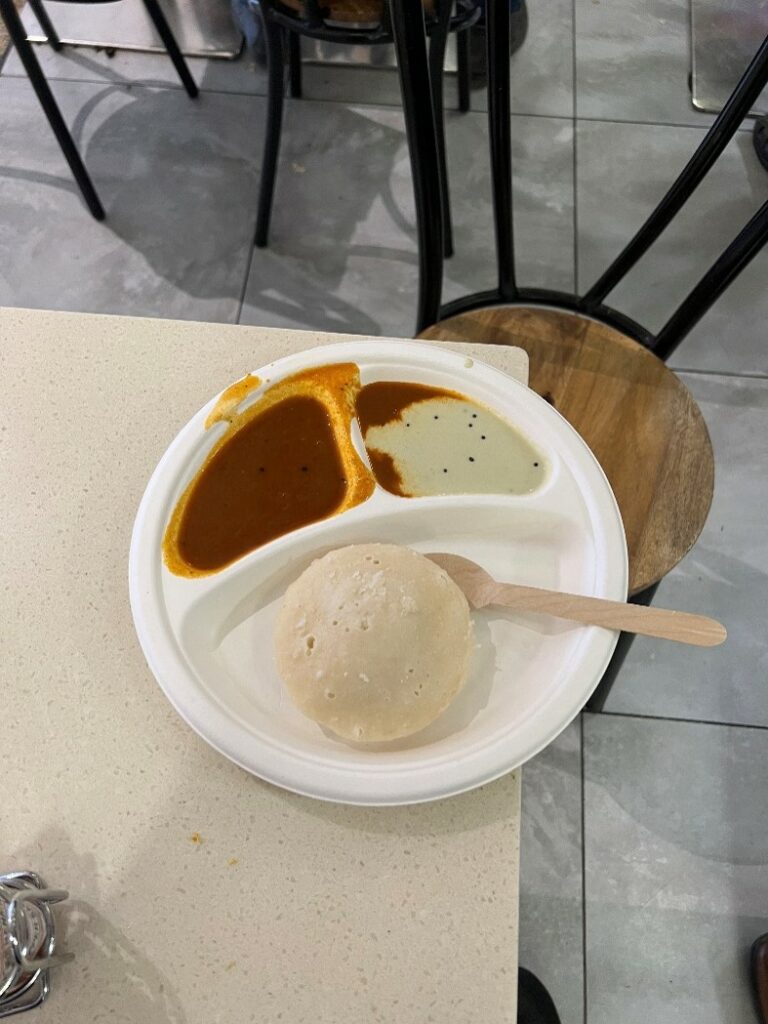 The Seat in Vistara’s Premium Economy…

Now, the major difference between economy and premium economy seats is the width of each seat and extra leg space.

I was impressed and felt it was totally worth it, as it had an adjustable headrest, a USB charger, and a menu card with the meal choices for the day. 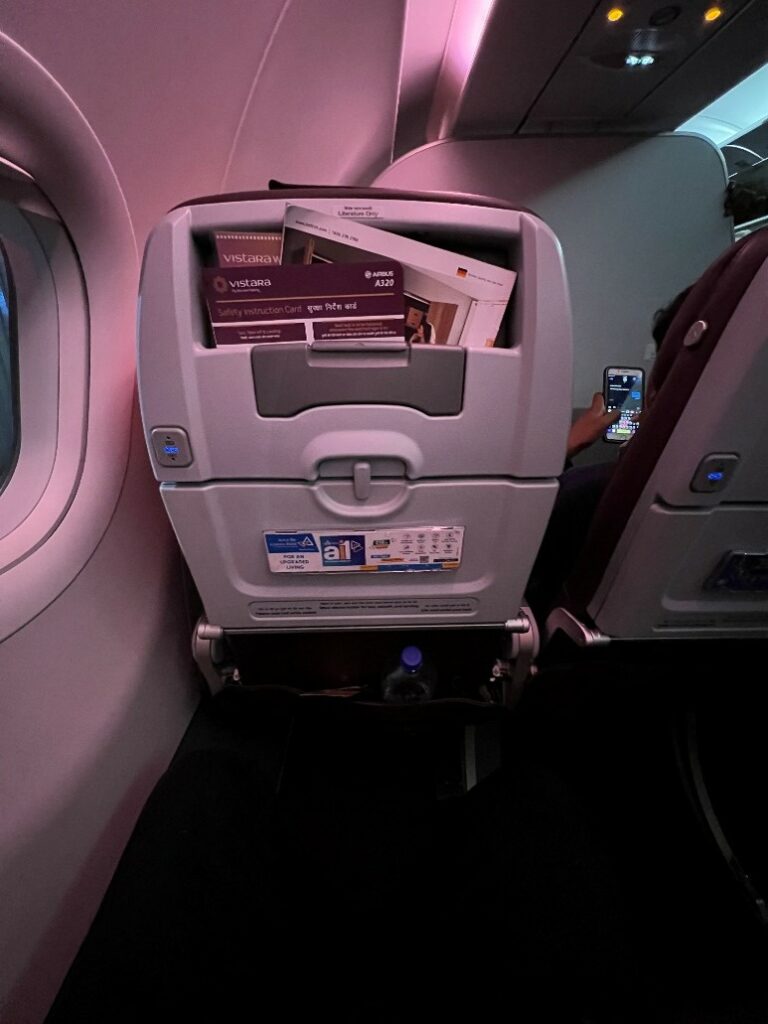 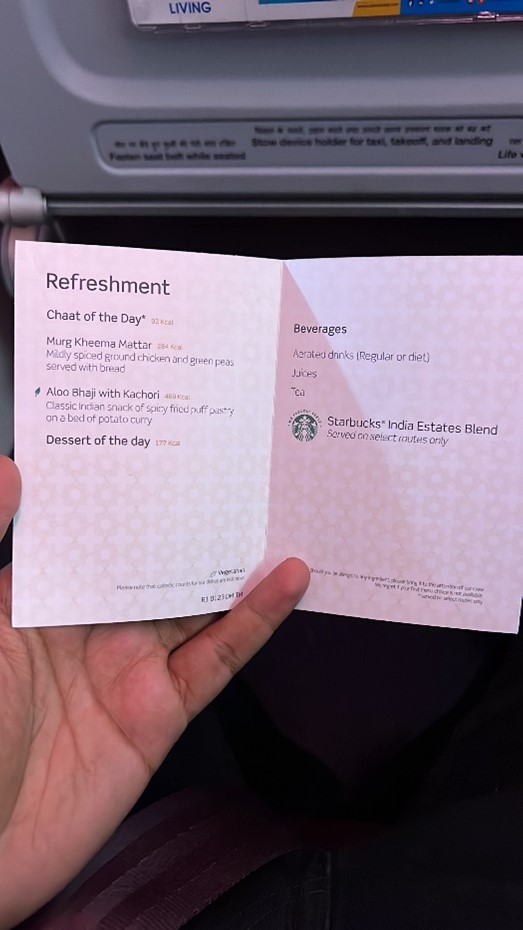 Soon after the take-off crew started meal service, we were offered an extensive food choice with the choice of beverage (aerated drinks of coffee/tea).

As always, Vistara never fails to impress me with its food selection, be it in the economy or premium economy.

The meal was delicious and warm, and the use of cutlery which was wrapped in a napkin, was a nice touch (no other airline in India serves meals in this way).

They even gave given a face wipe along with the meal, I loved their dessert and asked the crew for another one, and he was more than happy to give it to me.

Once the tray was collected, the cabin crew again came to each seat in premium economy and asked if they would like to have water/cold drink/coffee/tea.

This was a nice gesture, and even before I realized it, we were approaching BLR. 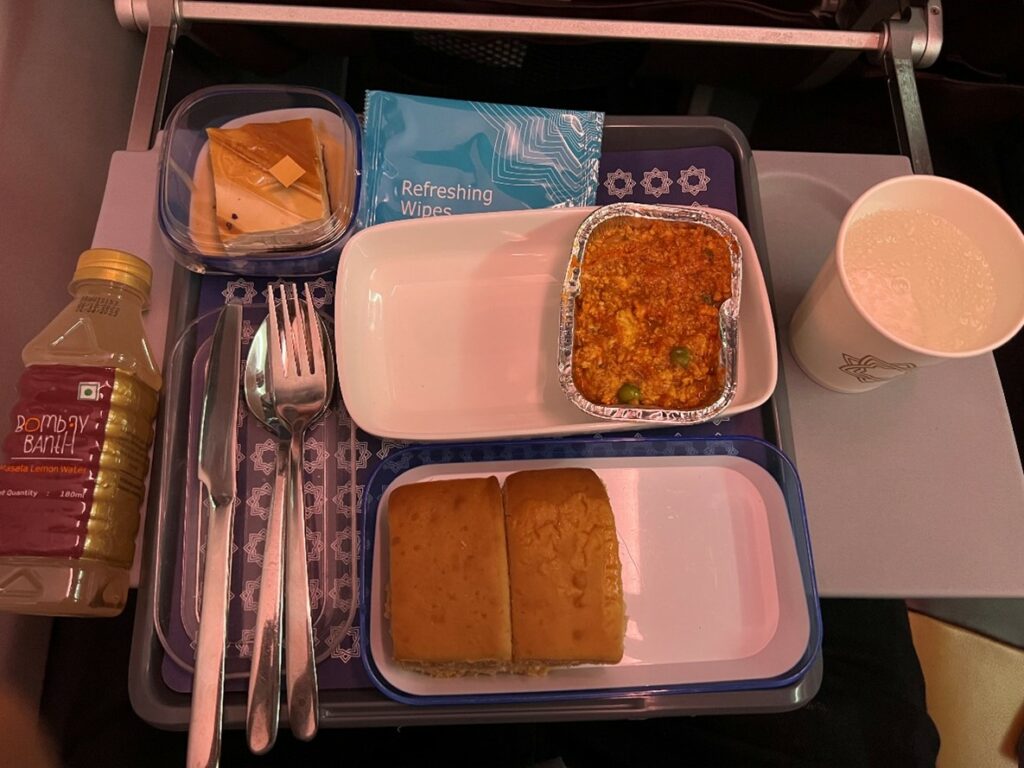 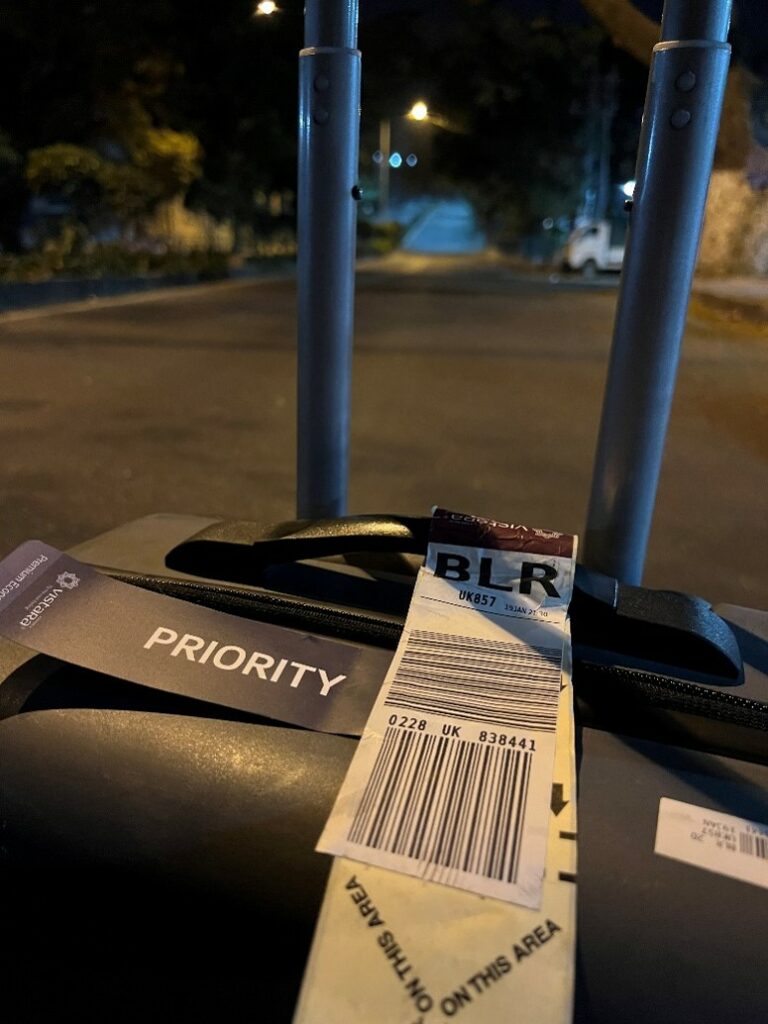 We arrived at BLR after a delay of almost 5 hours, and I was very exhausted by now. I walked straight to the taxi stand and took a cab back home.

Vistara clearly delivers one of the best services amongst any other carriers in India, and all my expectations on board this flight were met.

The only disappointing experience was how the ground staff handled the delay. They lacked in customer handling.

Only when the passengers got very upset that’s when they informed the ETD. This could have been avoided, and the staff could have proactively announced the reason, given out food vouchers, and assured them.

Now the most important question: – Is Vistara Premium Economy upgrade worth it? The answer is a big YES, you do not have to waste time at the check-in/baggage drop counter.

One gets 25 KG of baggage allowance; your luggage arrives first n the belt, thereby saving you some time.

Definitely, the hospitality in Premium economy is as similar to Business class (I will be flying their business class product sometime in February).

Tag: flight sales, flight sales today, flight sales black friday, flight sales right now, flight sales to europe. Chhatrapati Shivaji Maharaj International Airport, Vistara Premium Economy Trip Report.
Related News
Vistara Premium Economy: Is It Worth It?
8 Best Bitcoin Super Bowl Betting Sites of 2023
Top cop's warning to parents: Stop buying your kids booze for New Year's Eve
A search for a new quarterback: Lamar Jackson all but out for the Raiders
World Cup 2022: Best bets for Croatia-Japan match
Michael Broderick: ‘You can’t turn the switch on overnight and hope there are going to be houses coming out’
24-hour yellow warning for snow and ice issued for West Midlands
Planning to avail of a home loan in India? 3 things to keep ready before you do
Customer Service Headsets Market is set to experience a significant growth rate | Jabra (GN Group), Plantronics, Sennheiser
Sam Smith and Kim Petras reveal they’re working on the follow up to their smash hit Unholy
Kim sets out new goals for North's military, KCNA reports
November horoscope: What does the transit of planets mean for all zodiac signs
Latest News
Dungeons and Dragons and Hawkeyes: D&D campaigns on campus
Toronto police chief, union president highlight call for bail reform - Toronto
Why are there protests in Peru and what comes next?
4 suspects in Haiti presidential slaying taken into US custody
Jumbo Shrimp aim to build on mission to increase diversity in baseball
Paul Klee: By hiring Sean Payton, Broncos try to buy their way back to NFL relevance
Will Smith & Martin Lawrence Confirm ‘Bad Boys 4’ Is In The Works: It’s ‘Official’
F-35s Deploy to Greenland for First Time, Operate from Thule
AP Top News at 8:48 p.m. EST
A killer in a Spanish church
Peru's Congress again delays decision on early elections, as protesters...
CP Daily: Tuesday January 31, 2023 « Carbon Pulse
Learn More About the Potential Benefits of CBC in Our Latest Primer
FSIN calls for Harvard hockey coach to resign after reported racist comments
How a verbal miscue spawned a video and a giant snow sculpture in tiny N.B. village