Full version at the Ukrainian Hromadske

The Security Service of Ukraine has put out three theories about the causes of the helicopter crash that occurred in the city of Brovary in Ukraine on the morning of January 18.

At about 8 am, a Ministry of Internal Affairs helicopter crashed near a kindergarten and a residential building. Interior Minister Denis Monastyrsky, his first deputy Yevgeny Yenin, Secretary of State Yuriy Lubkovich, and six others were on their way to a conflict area. All nine passengers were killed. Five people on the ground were also killed when the helicopter crashed, including a child.

The investigation will give an official answer in a few weeks. So far, they have three theories: 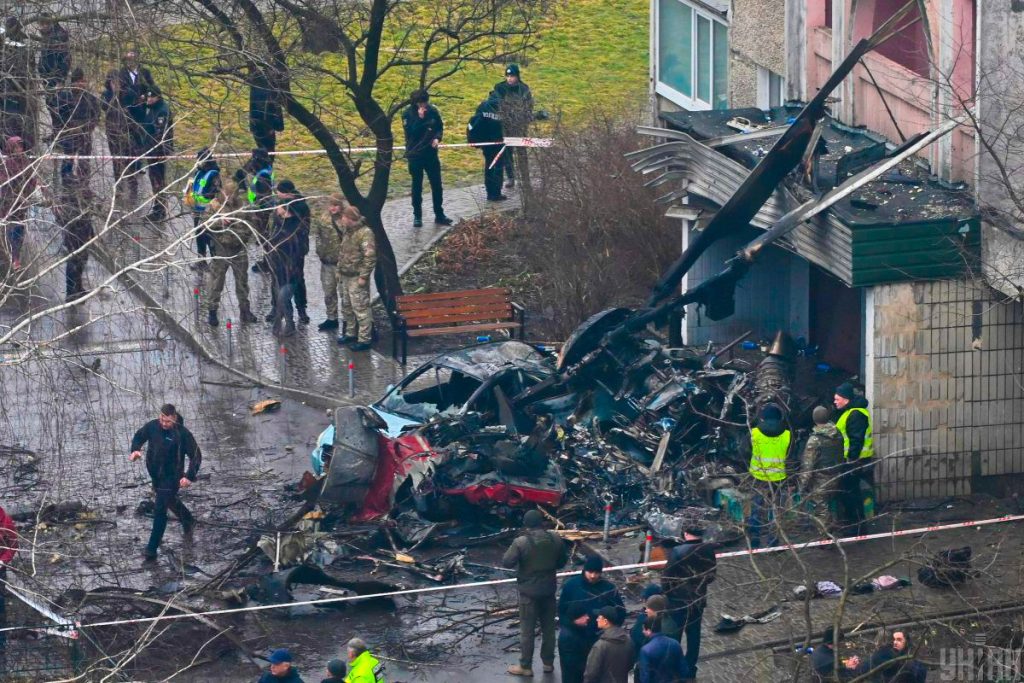 The Airbus H225 Super Puma helicopter is not without problems.

For example, in 2016 a block with several blades flew off one such helicopter in Norway, causing the death of thirteen.

“This helicopter is certified by the European Aviation Safety Agency. The same helicopters are used, for example, by the Japanese Coast Guard and the police, as well as Korea, China, Spain. It is very common,” aviation expert Denis Tomenchuk says.

After the crash in Norway, the Super Puma was upgraded. The Ukrainian Ministry of Internal Affairs began to purchase these helicopters in 2018, but some of the aircraft were second-hand.

“And Norway has completely abandoned this model. Poland ordered the same helicopters. But when I found out about the decision of the Norwegians, I also quickly abandoned them,” investigator Yuri Nikolov wrote on Facebook.

But Denis Tomenchuk believes criticism of the helicopter type is unwarranted. In terms of technical performance they are definitely better than their Soviet counterparts, which Ukraine uses more. “It’s like comparing Mercedes and Zhiguli.”

“There are no helicopters in the world that are 100% safe. We cannot rule out a technical malfunction as a possible cause of the disaster,” Tomenchuk says.

There was heavy fog in Brovary that morning, and Ukrainian helicopters fly at low altitudes so the enemy can’t detect them. Poor visibility and low altitude are thus possible causes of the tragedy.

There is also a question of whether the route was correctly planned.

“Specifically with regard to this flight the commission must establish who agreed on the route, whether the pilots had sufficient qualifications to fly in such weather conditions and at such an altitude. The pilots might not have noticed an obstacle, there might have been some kind of antenna on a house. But this is only an assumption,” Denis Tomenchuk says.

“The actions of the crew members should also be evaluated,” Bogdan Dolince of the National Aviation University says.

Vasily works next to the kindergarten where the helicopter crashed and saw the last seconds of its flight:

“The helicopter banked to the left side and then sharply to the right.A few seconds later it crashed. I didn’t see the helicopter on fire while it was flying.”

“You need to know the design of the helicopter very well so that damage can only affect in flight. It is very difficult to damage a single part so that no one notices it. Helicopter systems also provide advance warning of a technical problem. And you need to get into enemy territory, into the hangar where the helicopter is,” he says.