Tuhina scores career-high 15 points in WSU’s loss to No. 9 UCLA

Tuhina scores career-high 15 points in WSU’s loss to No. 9 UCLA

The Cougars were close midway through the third quarter like they have been so many times before. With the UCLA Bruins playing stout defense all afternoon, the game was beginning to get out of hand.

Astera Tuhina surveyed the Bruins’ defense and pitched it to Johanna Teder, who pitched it right back to Tuhina for the shot. As it glided through the air and into the net, the small but mighty Beasley Coliseum crowd erupted in celebration.

The Cougs wasted no time keeping the crowd on their feet. Tuhina quickly got the ball back and put it right back where Wazzu wanted it for her second straight 3-pointer.

Despite Tuhina scoring a career-high 15 points, the Cougs could not win in their fourth game of the year without their star point guard Charlisse Leger-Walker, who remained in New Zealand because of a family matter.

UCLA made the shots that Wazzu simply could not and jumped out to a 9-2 lead. The Bruins were proving they were everything their top ten Associated Press ranking implied.

UCLA’s Gina Conti sunk shots throughout the game on her way to 12 points as part of a 5-for-12 night that included two 3-pointers.

The Cougs were not about to be punched in the mouth without getting back up. Tara Wallack hit a stand-up 3-point shot. She would later cash in for a layup and an and-one shot as part of her 11-point, 3-for-9 shooting night, which included two 3-pointers. Although only a third of her shots fell in, Wallack added 3 points via her five free throw attempts as she played all 40 minutes.

The difference of the game proved to be the Bruins clutch approach to the buzzer before the break. UCLA ended both the first and second quarters with buzzer-beating shots in the final seconds of play for a combined five points.

UCLA’s ball security resembled La La Land’s performance in the Oscars: pretty strong, but no best picture as the Cougs snagged 13 turnovers and turned the ball over 12 times.

Grace Sarver lured a Bruin ball into her hands for a dynamic turnover at the UCLA end of the court. Unfortunately, Bella Murekatete’s shot fell flat and the Cougs remained down by 9 points. 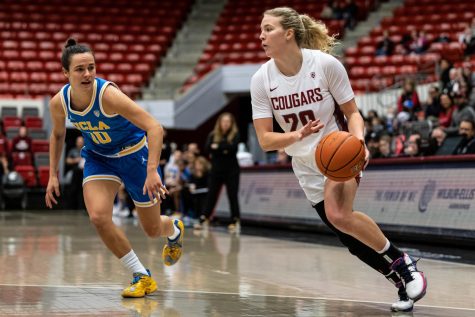 The Cougs could not keep UCLA at bay as they held the lead for just over four total minutes.

UCLA had five players score in double digits, but no player shot better than 12 shots as they spread the ball around.

“[UCLA head coach Cori Close is] finding ways to win, they’re gritty, they’re tough, they can really change the game in how they guard, they guarded us really hard in the second half and I thought that affected us,” head coach Kamie Ethridge said. 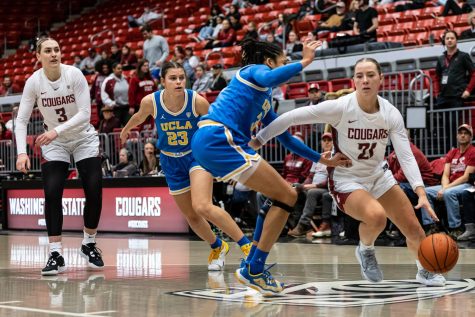 The Bruins took 23 3-point shots because WSU could not find an answer for it.

Toward the end of the game, Ula Motuga fell into foul trouble. The Cougs looked desperate as every scoring opportunity fell flat.

Sophomore Kaia Woods got some Pac-12 playing time because of her hard work in practice and her ideal matchup against UCLA’s Londynn Jones.

WSU International students were celebrated during the game and took a picture with the team that includes nine student-athletes.

“We’re never going to stop recruiting internationally so if we can make the kids that we’re recruiting all across the world see the diversity we have on campus,” Ethridge said. 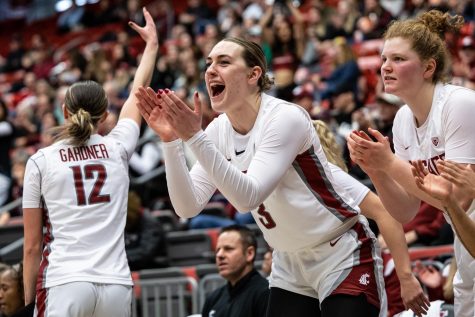 The Cougs are next in action at 5 p.m. Friday at the ASU Wells Fargo Arena in Tempe, Arizona.