Transit workers union speaks out amid 'out of control' violence, calling for national task force

Transit workers union speaks out amid 'out of control' violence, calling for national task force

A union that represents 35,000 transit workers in Canada is calling for a national task force involving all levels of government to tackle violence against workers and riders on public transit systems across the country.

At a news conference Wednesday, John Di Nino, national president of the Amalgamated Transit Union (ATU) Canada, spoke out about the "alarming number" of incidents across the country, saying the time for action is now.

"The swarmings, the unprovoked stabbings, today's incident of someone running around with a syringe, it's only a matter of time before these injuries become catastrophic and start to take lives. We need to act now, not tomorrow," he said.

Di Nino said his union estimates there are some 3,000 transit operator assaults happening each year across Canada, and those are just the ones being reported, he said.

He pointed to rising violence on transit systems in Halifax, Saskatoon and Vancouver as well as a "strong uptick in Alberta," in addition to several attacks that have made national headlines on Toronto Transit Commission (TTC) vehicles, as well as at its bus stops and in its subway stations. In Alberta, two operators were recently held up at gunpoint, he said.

WATCH | 'Our systems are not safe,' president of transit workers union says:

'Our systems are not safe,' president of transit workers union says

John Di Nino, national president of the Amalgamated Transit Union (ATU) Canada, is calling on all three levels of government to create a national task force to deal with a spike of violent incidents on public transit systems across the country.

Asked about the ATU's call for action Wednesday, Prime Minister Justin Trudeau told reporters, "If there's a role for the federal government to step up, we will no doubt step up.

"It's something that we're happy to partner with the provinces and municipalities on."

In an interview with CBC Toronto Tuesday, Di Nino said transit violence is "way out of control" and a task force would ask hard questions about what is happening and determine which actions to take to protect workers and riders.

"We need all levels of government to come together with our municipalities, with the transit agencies, and with quite frankly, with the largest transit union, the ATU, and sit down and come up with constructive ways on how we can mitigate the risk to our workers and to our riders, provide the best possible protections we can and look at all the elements to reduce the effects of violence," Di Nino said. 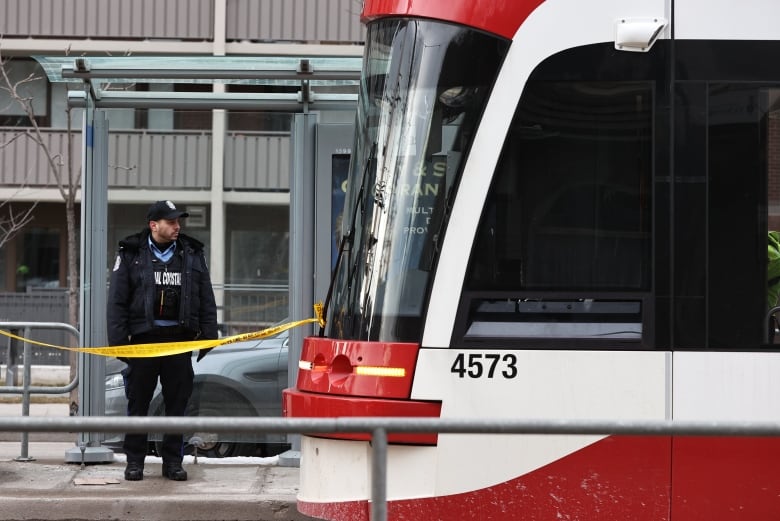 A woman in her 20s was stabbed multiple times on a Toronto streetcar on Tuesday. (Evan Mitsui/CBC)

"Look, we understand some of these things are unavoidable. All of the best protections aren't going to stop assaults and violence, or stop those with mental health issues. But we need to put our best foot forward here," Di Nino said.

"We can't just sit after every crisis, after every incident, and say we need to do better. We need to stop talking and we need to start acting on developing those programs and policies that are best going to protect everyone who is at stake."

He said the task force would ask such questions as: What are the key issues? What do the attacks look like? How many are happening daily? How many are going unreported? How do transit agencies rebuild safe systems after the pandemic?

On Tuesday, a woman in her 20s was stabbed several times on a TTC streetcar. On Monday, two TTC workers were assaulted on a bus in Scarborough. On Saturday, a TTC operator, a 24-year-old woman, was shot by a BB gun while waiting to begin her shift in Scarborough.

The latest such incident was reported by Toronto police Wednesday morning. Investigators say a suspect chased two TTC employees with a syringe, but they were able to get to a collector booth and were not harmed. The suspect was arrested, police say.

'I was just hit right in the forehead'

Alexandra Stoeckle, the bus driver shot with the BB gun, told CBC Toronto on Monday she was leaning against a bus shelter and looking down at her phone when she was hit several times at Markham Road and Progress Avenue.

"I felt something just start hitting me in the chest and it kind of felt like raindrops or pebbles. I thought maybe a car was kicking it up as it was going by. It is a very busy intersection. I looked up, and before I fully looked up and saw what was happening, I was just hit right in the forehead," she said

Stoeckle said she covered her face, turned away and was struck a few more times before seeing a young person, leaning out the car window with a orange-tipped BB gun, yell obscenities at her and the TTC. Then the car sped off. 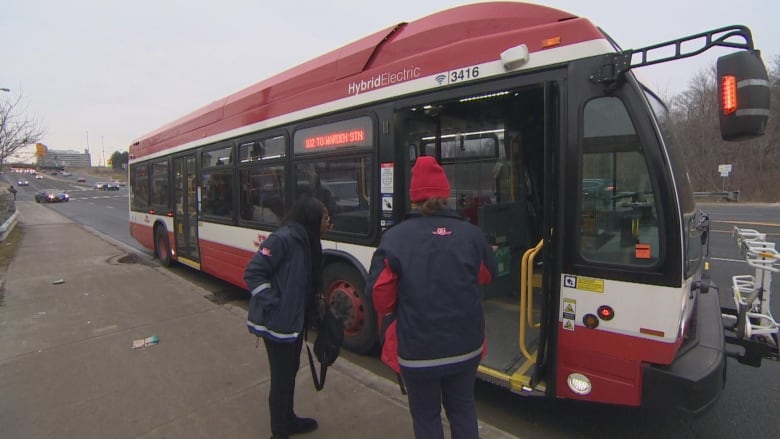 TTC operators stand by a bus near the intersection of Markham Road and Progress Avenue on Jan. 22, the day after an operator was shot with a BB gun while waiting to start her shift. (Spencer Gallichan-Lowe/CBC)

Stoeckle said Leary agreed to sit down with her to talk about TTC worker safety. Stoeckle said she wants staff to be able to wear their own clothes while in public, for driver changeovers to happen only at stations, and more security on routes and at stations.

TTC chair Jon Burnside, who represents Ward 16, Don Valley East on Toronto city council, said he is interested in getting Tory, Leary and ATU Local 113, which represents about 12,000 TTC workers, to the table to talk about solutions.

"People are getting hurt," Burnside said on Tuesday.

"Let's not preclude any idea. We need to be very open-minded about how we approach that and let's not stifle the debate before it begins."