Scientists Create Robot Able To Shift Between Solid And Liquid Like The T-1000, See The Video

Scientists Create Robot Able To Shift Between Solid And Liquid Like The T-1000, See The Video

Updated: 5 days, 16 hours, 42 minutes, 8 seconds ago
Scientists Create Robot Able To Shift Between Solid And Liquid Like The T-1000, See The Video

Scientists made a robot that can shift from a solid to a liquid form in order to navigate the human body. 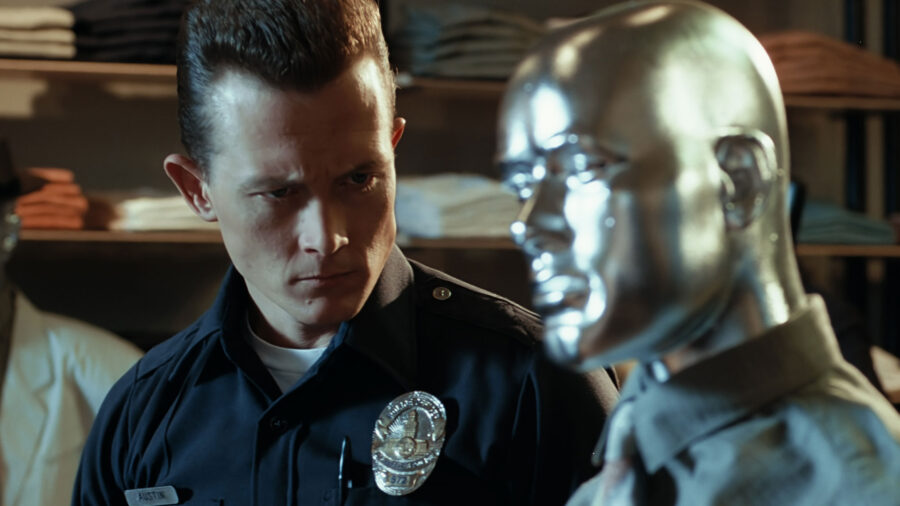 A team of scientists led by Dr. Chengfeng Pan of the Chinese University of Hong Kong have created a liquid robot, ripped straight from the scenes of your favorite Terminator film. A YouTube video shared by the Telegraph depicts the exact movement of this marvel of modern science on camera, with further explanations offered in a write up by IFL Science. The robot, which is made primarily of gallium, shifts from solid to liquid and back again, in an application James Cameron will surely be itching to depict on film.

Pan’s students explained that they were inspired to bring the shape shifting liquid robot to life after studying sea cucumbers, whose cell tissue stiffness can harden or loosen to protect from predators. The video posted by the telegraph demonstrates this capability in what we strongly believe is an intentional homage to Robert Patrick‘s show stopping scene in Terminator 2: Judgement Day, wherein the T-1000 performs this exact trick to escape from a similarly framed prison cell. The robot, which appears in the shape of a Lego minifigure, liquifies itself to escape from its man made shackles.

Apparently the robot was created for the purpose of going inside the human body to safely remove foreign objects, but any classic film fan may be hesitant to swallow this tiny Terminator, for fear of being mind controlled by Skynet. The video itself may look like a trick of the camera a la the classic Lego stop motion YouTube films which were highly prevalent across the video sharing site throughout the early 2000’s, but this liquid robot is real and ready to overtake humanity. At this time, top scientists from Carnegie Mellon University have concluded that the material lacks the practical applications to complete its Magic School Bus mission through the human gullet, but the science is groundbreaking nonetheless.

The science behind the liquid robot is highly complicated, and requires a better understanding of particles and other magic terms to describe, but the basics are this: gallium acts as a metal which melts at a low enough temperature to not require an outside heating source. In order to achieve the disappearing reappearing solid status, scientists added particles of something called neodymium-iron-boron, which behave as magnetic binders, providing restructuring capability to the liquified form. This creates a real world application for the vision James Cameron initially had in 1984, before the technology would even allow him to commit it to film using CGI.

It wouldn’t be until 1991 that the esteemed nutcase filmmaker could bring the concept to the big screen, and not until 2023 for science to make it a reality. The liquid robot only functions in a small testing capacity at this time, but will surely pave the way for future scientific endeavors within this vein. To think, centuries of packed ER waiting rooms filled with people who foolishly ingested inanimate objects may soon be a thing of the past, and all at the hands of a team of scientists bringing a classic action film antagonist to life.