That only Erling Haaland has scored more goals than Marcus Rashford among Premier League players in all competitions this season places the England striker’s progress in perspective as his 18th of the season allowed Manchester United to place one foot in the Carabao Cup final.

If Sunday’s defeat at Arsenal curtailed any optimistic dreaming of league glory, perhaps it served to whet Erik ten Hag’s appetite to land a more realistic target for silverware in the cups. His first XI made short shrift of Nottingham Forest in the first leg of this semi-final as further goals from Wout Weghorst and Bruno Fernandes gave them a comfortable cushion before next Wednesday’s return leg at Old Trafford.

The return of Casemiro, after he was suspended at the Emirates, leant a calm and a drive to United’s midfield but it was Rashford’s brilliant directness that helped set them apart from opponents who are now free to focus on retaining their Premier League status.

Forest attacked well enough, but Fernandes’ goal a minute from time, when he rammed home a low drive after being picked out by Anthony Elanga, gave a measure of the difference between these teams.

Rashford is further behind Haaland’s 31 goals than United are behind Arsenal in the league but it is the momentum that is as encouraging as anything for Ten Hag as he seeks to end United’s six-year wait for a trophy. It was in this competition and then against these opponents, in the week surrounding Christmas, that Marcus Rashford’s hot streak began. Helping knock Burnley out of the Carabao Cup and then starting a 3-0 rout of Forest showed a man seemingly returning to the height of his game. How he has kicked on since then.

The opener here was his 10th goal in 10 games since the World Cup, and his 18th for United this season. How simple he can make the game look. There did not look too much danger on as Lisandro Martínez, near his own byline, found Fernandes.

His pass invited Rashford to set off from inside his own half; still Forest did not look too perturbed. Perhaps they should have been. Rashford simply ran at Remo Freuler and Joe Worrall, then in between them and, gaining one slightly fortuitous ricochet, to pass the ball between Wayne Hennessey and his near post. 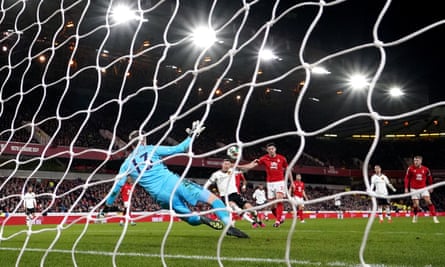 United looked in total control, Antony cutting inside from the right wing to curl two left footers just wide, but then Forest thought they had equalised.

Bravely leaving Morgan Gibbs-White up in the No 10 position even when United were attacking, they benefited when Danilo sent their record signing scampering away. He waited late – too late as it transpired – to pass wide for Sam Surridge to sidefoot neatly into the far bottom corner with his right foot. VAR adjudged the striker offside by a knee.

This gave Forest heart however and when Gibbs-White’s corner was punched clear by David de Gea, Gustavo Scarpa sidefooted an exquisitely technical volley from just outside the penalty area for the United goalkeeper to parry away to safety.

Forest were getting their head of steam up now and twice Johnson was sent running clear down his favoured inside-right channel. Firstly Scarpa’s pass offered him a footrace with Aaron Wan-Bissaka which he won but proceeded to shoot low for De Gea to save to his right.

Privacy Notice: Newsletters may contain info about charities, online ads, and content funded by outside parties. For more information see our

When he got away moments later, Gibbs-White stealing the ball off Casemiro to feed him, the Wales striker aimed towards the near top corner, but blasted wide.

The game was becoming increasingly end to end, a second goal looking imminent, and when Antony combined well with Weghorst to get clear inside the area, Hennessey, deputising for Dean Henderson, spread himself wide to save superbly.

United did seem to have put the game to bed in the 45th minute however. Talk about a great time to score. Antony started the move with a neat ball around the corner inside his own half and continued his run to receive a protracted return pass from Casemiro. The Brazilian took his time to allow the ball to bounce up before arrowing a shot that Hennessey could only parry. Weghorst stabbed the ball high into the net on the rebound for his first United goal.

Whether Forest were being courageous or naïve in leaving three up when United attacked, it helped make this game a spectacle. Christian Eriksen wafted a beautiful shot against the angle of bar and post.

After receiving a knock to the ribs from Serge Aurier, Rashford’s night, in front of the watching England coaching duo of Gareth Southgate and Steve Holland, was done after he was replaced by Alejandro Garnacho.