The New York Rangers held an open practice for fans at Madison Square Garden on Saturday and they packed the house with approximately 6,500 in attendance.

Of note was the return of Julien Gauthier to being a full participant, as he took rushes on the fourth line. Fans in attendance were also given a sneak peek at potential new line combos for Monday’s match up against the visiting Florida Panthers.

The Rangers are reuniting the Kids Line, more likely because of the need for Gerard Gallant to break up Artemi Panarin and Vincent Trocheck than anything else.

“I’ve talked about our second line all year long playing harder defensively and not giving up the odd man rushes,” Gallant stated after the loss to Boston. “[Panarin and Trocheck] have to better than what they are… They better get better. We need a lot more defensively. They’re our top players and they could’ve scored three or four, but they could’ve given up four or five just as easy. That’s not what coaches want.”

Regardless, the Rangers are stacking the first line and there’s an argument to be made which is really the second line looking ahead. By putting together Trocheck with Vesey and Goodrow you get a solid forechecking line that is a threat to score. Meanwhile, Chytil centering Lafreniere and Kakko is a high energy skill line.

“A lot of changes,” Gallant said on Saturday. “We’re just trying to balance everything out.”

The Blueshirts are scheduled to practice again on Sunday, so we will see if these lines stick. 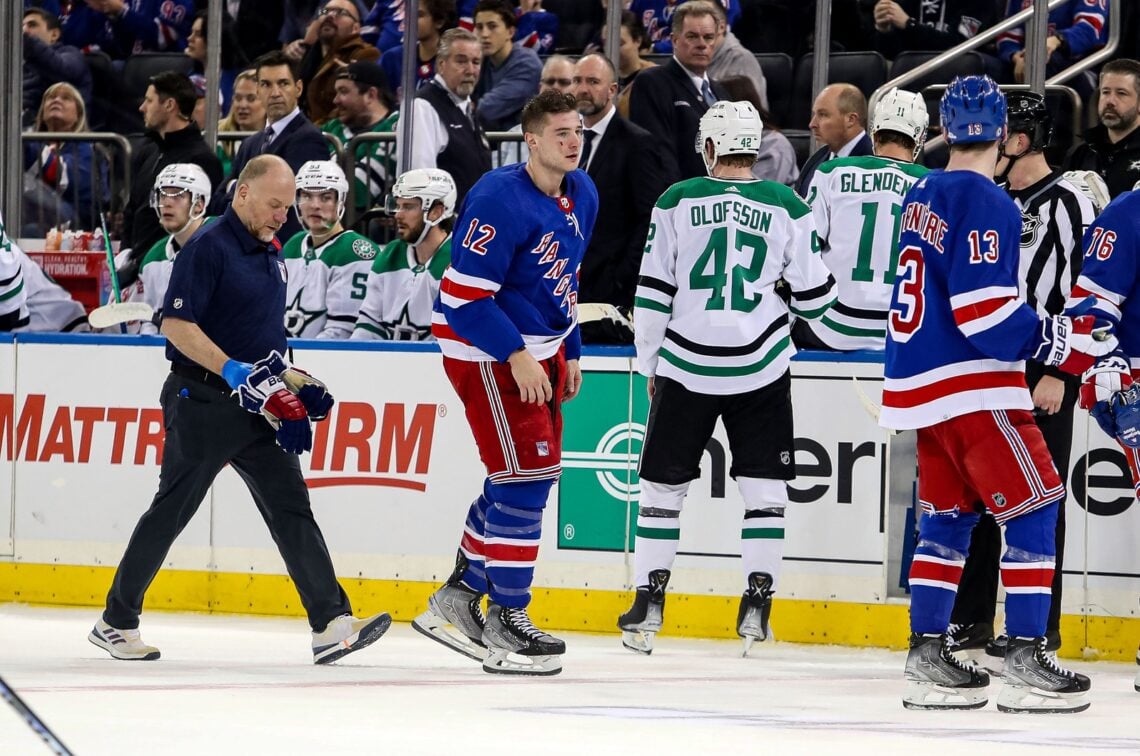 Julien Gauthier has been activated from injured reserve late on Saturday. The move came after the Rangers placed Jonny Brodzinski on waivers to make room for his return.

“I think he looked really good,” Gallant said earlier. “It’ll be a full practice tomorrow and he’ll probably be cleared.”

The upper-body injury occurred in the Rangers dramatic 2-1 overtime win against the Dallas Stars on January 12, when Sammy Blais accidentally collided with him.

Saturday was defenseman K’Andre Miller’s 23rd birthday and fans at the open practice made sure to let him feel the love.

“That was awesome,” Miller said. “I’m very grateful for everyone coming out and singing Happy Birthday. They didn’t need to do all that. It was good to see everyone out there at practice today and it was a fun experience.”

The Rangers young star is having a great season and was recently named the team’s top player under 23 last week by The Athletic.

A pending RFA this summer, he’s registered 25 points in 46 games to establish a new career-high for points in a single season.

I’ve reached out to Miller’s agent to see if there’s been any substantial talks between the two sides but have yet to receive a response. The Rangers would be wise to lock up Miller to at least a four-year deal in the neighborhood of $4.5M AAV as soon as possible.