Power to the people: How an Mpumalanga town took on Esk...

Power to the people: How an Mpumalanga town took on Esk...

It started during one of the coldest winters in memory in Standerton, at the height of the 2020 Covid-19 lockdown.

It became a case that would trigger an avalanche of legal action against Eskom over the failure to provide reliable energy.

Back in 2020 in what the Lekwa municipality called “internal load shedding”, Eskom started limiting the amount of electricity that towns in the municipal areas were receiving.

“Internal load shedding” was a deviation from a previous plan to force the municipality to pay, as Eskom would in the past just stack up the penalties and add this to yet another unpaid bill.

“Internal load shedding” meant that each part of the town would have scheduled power outages three times a day for two hours each time.

It was killing the town not 25km from Tutuka, one of Eskom’s fleet of major coal power stations. But nobody told the residents what was happening. A single, unsigned “press release” was discovered by residents looking for information, but where it came from and who wrote it was never discovered.

So residents started meeting to make their own plans and put a stop to it. At the time, lockdown regulations limited public gatherings to 50. So they did just that. Fifty people at a time. For weeks. Until they were ready to go to court.

Winter temperatures dropped to as low as -13°C that year as power cuts continued. Guesthouses hosting mostly Eskom contractors were struggling to make breakfast and provide hot water. The prison was affected. Farms struggled and feed-processing plants couldn’t operate at maximum capacity. The mill, where fabric is made, suffered hundreds of thousands of rands in damage. Chicken farmers were on their knees, as some chickens died as a result of power cuts and others got too big for the abattoir because of long waiting times.

It was relentless. “An absolute catastrophe was unfolding,” court papers read.

At the height of the Covid-19 pandemic the hospital was not exempt. The whole town’s power was off. The frail-care centre had a single generator keeping alive 43 elderly people who depended on medical devices.

Doctors were doing C-sections without electricity. Once, they begged for 45 minutes to finish a life-saving surgery. The answer was no.

Water was pumped straight into pipes because there was no time to go via the reservoir. It came out of the taps brown and stinking.

The long power outages saw sewage flowing freely into the Vaal River, dangerously close to where drinking water was pumped if there was power. Raw sewage was no longer pumped and was allowed to flow down the streets and into the manholes.

The dispute was not between the residents and Eskom. It was between Eskom and the municipality, which was regularly defaulting on paying its power bill.

After months of consultation, engineer Stephanus Potgieter wrote his affidavit on behalf of the Lekwa Ratepayers Association. A 20-year resident, an engineer and a businessman with thousands of clients in the area, he started by naming those who served on the association’s steering committee: Ronald Tsotetsi, Rozanne van Deventer, Louis Bibby, Gary van Aswegen, Pheello Mlotshwa, Gabriel Mogale, Ferdi Weyers, Michael Prinsloo, Fanie Potgieter, Wilma Coetzer and Sizwe Dlamini.

“We are fused together in defence of a town [being] thrown to the dogs,” an affidavit before court read.

On 28 August 2020 Acting Judge Anthony Millar ruled in their favour.

At the end of his ruling, where he also decided to give a punitive cost order against Eskom, he remarked: “Most telling, however, was Eskom’s indifference to the consequences of the reduction in supply once it was brought to [its] attention.”

Eskom appealed and lost in the Supreme Court of Appeal and then turned to the Constitutional Court, where it lost again. 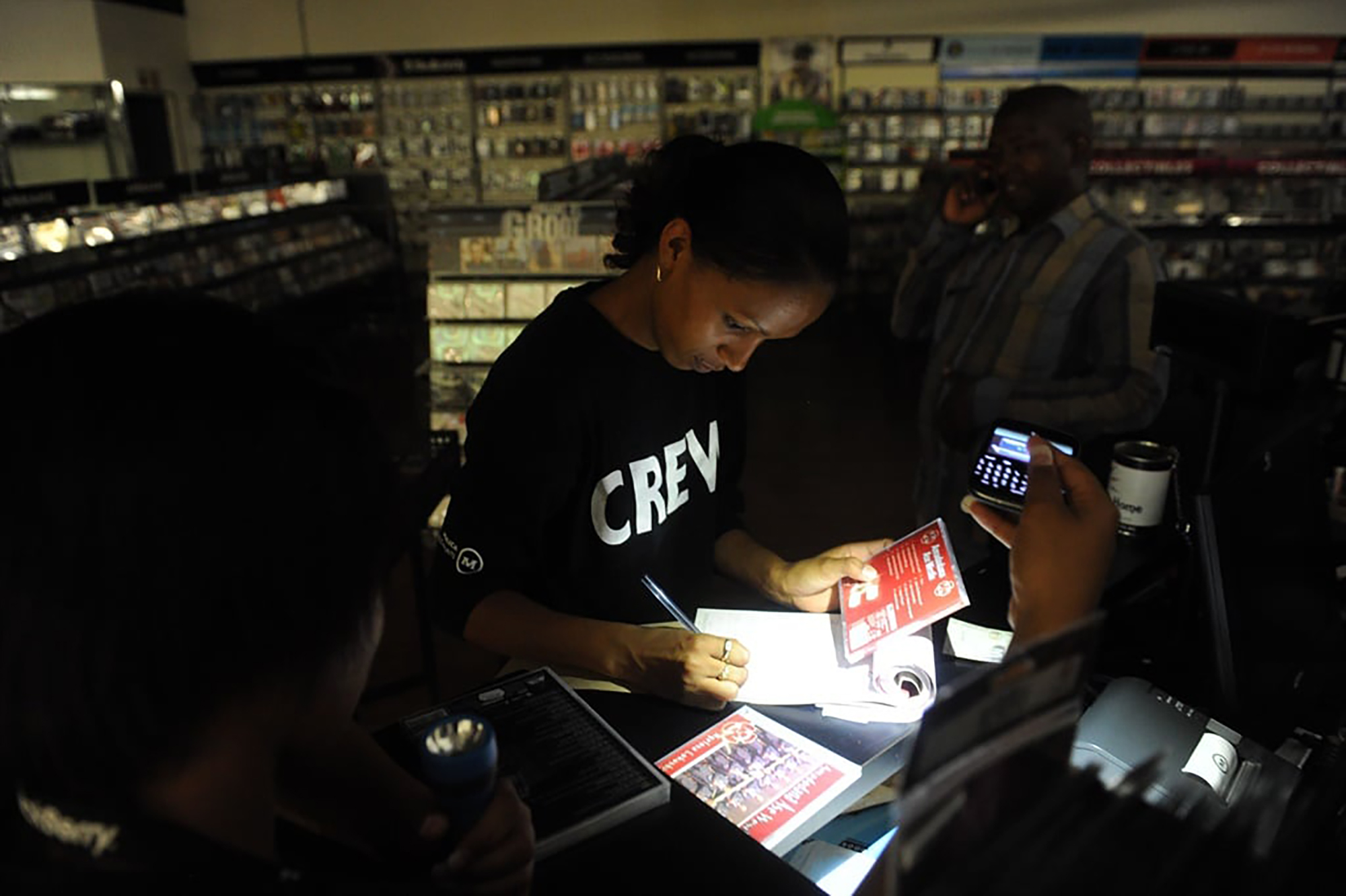 On 23 December 2022 the Lekwa Ratepayers Association finally won its decisive victory in the Constitutional Court when the court ordered that the throttling of the electricity supply must be halted and was contravening laws promoting fairness.

On 21 December, two days before this ruling was handed down, Eskom introduced similar load reduction in defaulting municipalities across the country. No notice was given, according to municipalities.

In the Karoo, water provision in towns was severely hampered, leaving residents scrambling to find water trucks, while their Christmas food was rotting in fridges that were no match for the summer heat.

Dr Imtiaz Sooliman from Gift of the Givers had already sent his team home for the festive season when the phone calls started coming.

“What could I do?” he said. “I asked them to come back. The people in the Karoo needed water.”

As load reduction was implemented along with load shedding, towns did not have power for eight to 10 hours a day and taps were running dry.

Gift of the Givers brought emergency water. “We needed the water tankers to help because with the extra load reduction, there was no water in the Karoo,” Sooliman said.

Residents, farmers and businesspeople all stormed the municipal offices. “But there was nobody there. Or if they were there they were not opening the door,” resident Sias Smith said.

In a lawyer’s letter from attorney Wikus van Rensburg, shared by mayor Willem Safers, the Dr Beyers Naudé Local Municipality begged Eskom to be allowed to reduce its own electricity usage in a way that would avert “a certain humanitarian disaster”.

And then news of the Lekwa Ratepayers Association came. Load reduction was stopped. The Eskom spokesperson said they would abide by the ruling of the Constitutional Court. 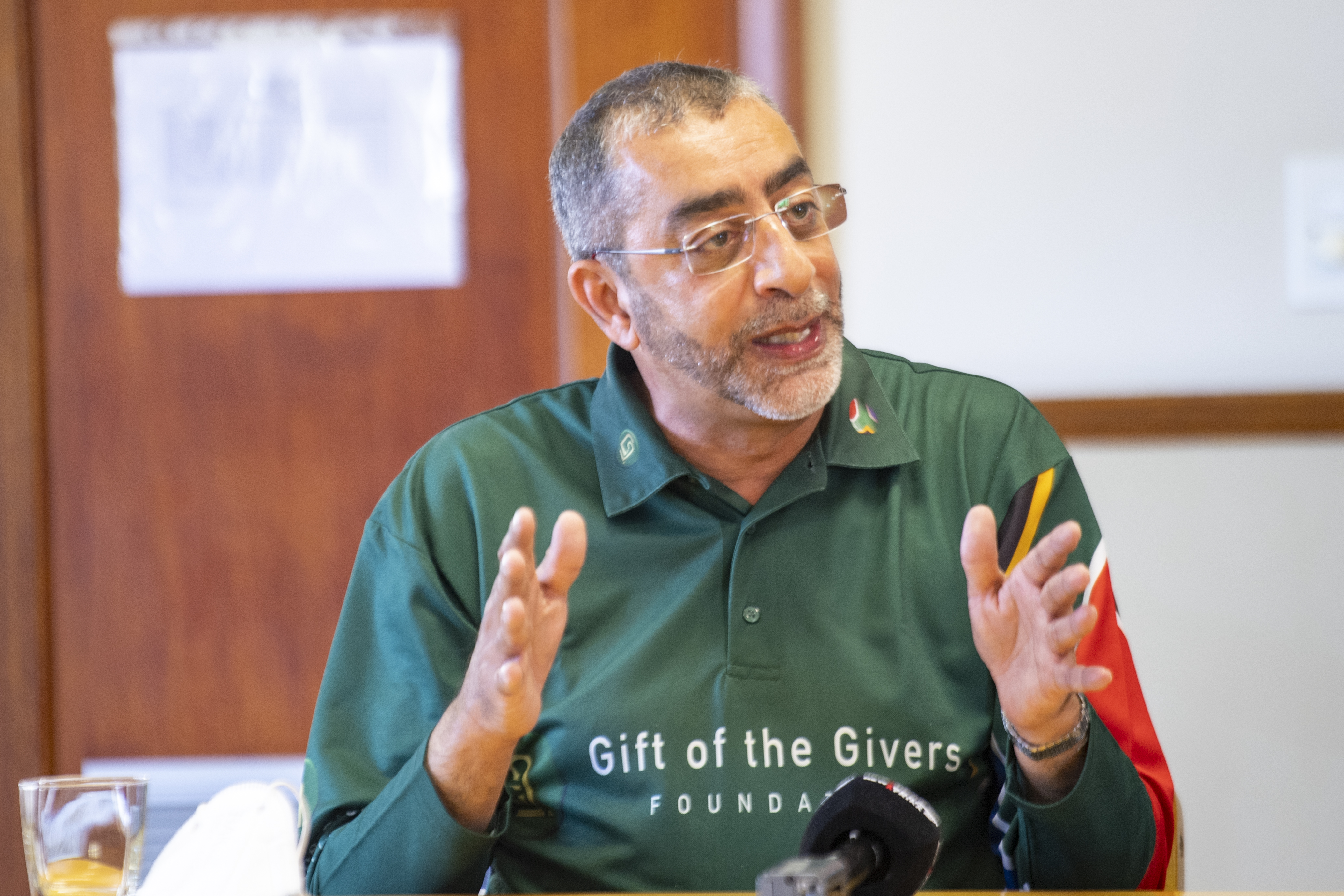 Dr Imtiaz Sooliman: “We must stop thinking that we are defeated by load shedding”

Load shedding is a huge inconvenience, but this is not a war zone, the founder of Gift of the Givers, Dr Imtiaz Sooliman, says when asked about how to keep a positive mindset while the country is being bombarded with persistent rolling blackouts.

“We must stop thinking that we are defeated by this,” Sooliman said.

“Our biggest miracle was in 1994. The international media was all here and it was the most boring story they never expected. Nothing happened. People decided to make peace. Mass death, hatred and revenge are things we cannot live with. People can survive load shedding,” he said.

“It is a huge inconvenience but this is not a war zone. It is not Syria. It is not the Ukraine. With load shedding we can understand what people have gone through.

“South Africans are a very forgiving nation. They have no water to drink and no toilets. In parts of the country there is starvation. When we have load shedding we should think and understand what people have gone through.

“This does not mean that we minimise our problems. Load shedding is terrible for the economy. It puts hospitals and communities at risk but we are not falling apart. We are not tearing each other to pieces.

“Look at the town of Orania. They are off the grid completely. I think everyone that can must go off the grid. That would be a way to take the pressure off Eskom. If every small town does it the pressure on the grid will be much less.

“We can sit and complain but why not do something? Put in an inverter. Get some solar lights. You may not be able to watch ­television but to pass two or three hours won’t be that difficult. Ask yourself what positive thing can I do.

“I have seen people pick themselves up – we are not in a war situation.”

The People vs Eskom

Here are the court cases filed and won against Eskom since December 2022:

In a case brought by the Lekwa Ratepayers Association, the Constitutional Court, in a majority judgment written by Justice Mbuyiseli Madlanga, held that load shedding as done by Eskom – without notice and not following a fair procedure – violated the Promotion of Administrative Justice Act.

Load shedding, the court continued, had led to an infringement of the rights to life, dignity, water and basic education, and the right to an environment that is not harmful to health or wellbeing.

The court dismissed Eskom’s “ominous threat” that if it was not allowed to ­continue with its “throttling,” the grid would collapse. The judges called this a “bogeyman that should be seen for what it is”.

While Eskom must avert the grid’s collapse, it must be done in accordance with the Constitution and the law, the court ruled.

Days before that ruling, Sakeliga filed legal action against Eskom “to end targeted load reduction” across the country. Its case specifically referred to instances where this was done on high feeder lines to stop illegal usage. But those who suffered the most loss were direct customers of Eskom, and they were paying their bills, according to papers filed in the matter. As in the other cases, no notice was given by Eskom. January 20, 2023 was the deadline for Eskom and the government to respond to a letter of demand from a group of politicians and small business owners. The letter asked that an undertaking be given that load shedding be stopped “forthwith” or an explanation be provided of why this cannot be done. On Thursday, 19 January the DA filed a case at the Gauteng High Court seeking an interdict against the implementation of an 18.65% increase in Eskom’s tariffs for 2023/2024 and a subsequent increase of more than 12% for the next year. The second part of the case asked for a mass legal review of the government’s decisions in dealing with the energy crisis. On Wednesday, 18 January two non-­governmental organisations, the Green Connection and the Southern African Faith Communities’ Environment Institute, filed papers in the Cape Town High Court to compel the government to implement sections of the National Energy Act that came into effect in 2008. DM168

This story first appeared in our weekly DM168 newspaper which is available for R25 at Pick n Pay, Woolworths, SPAR and Exclusive Books. For your nearest stockist, please click here. 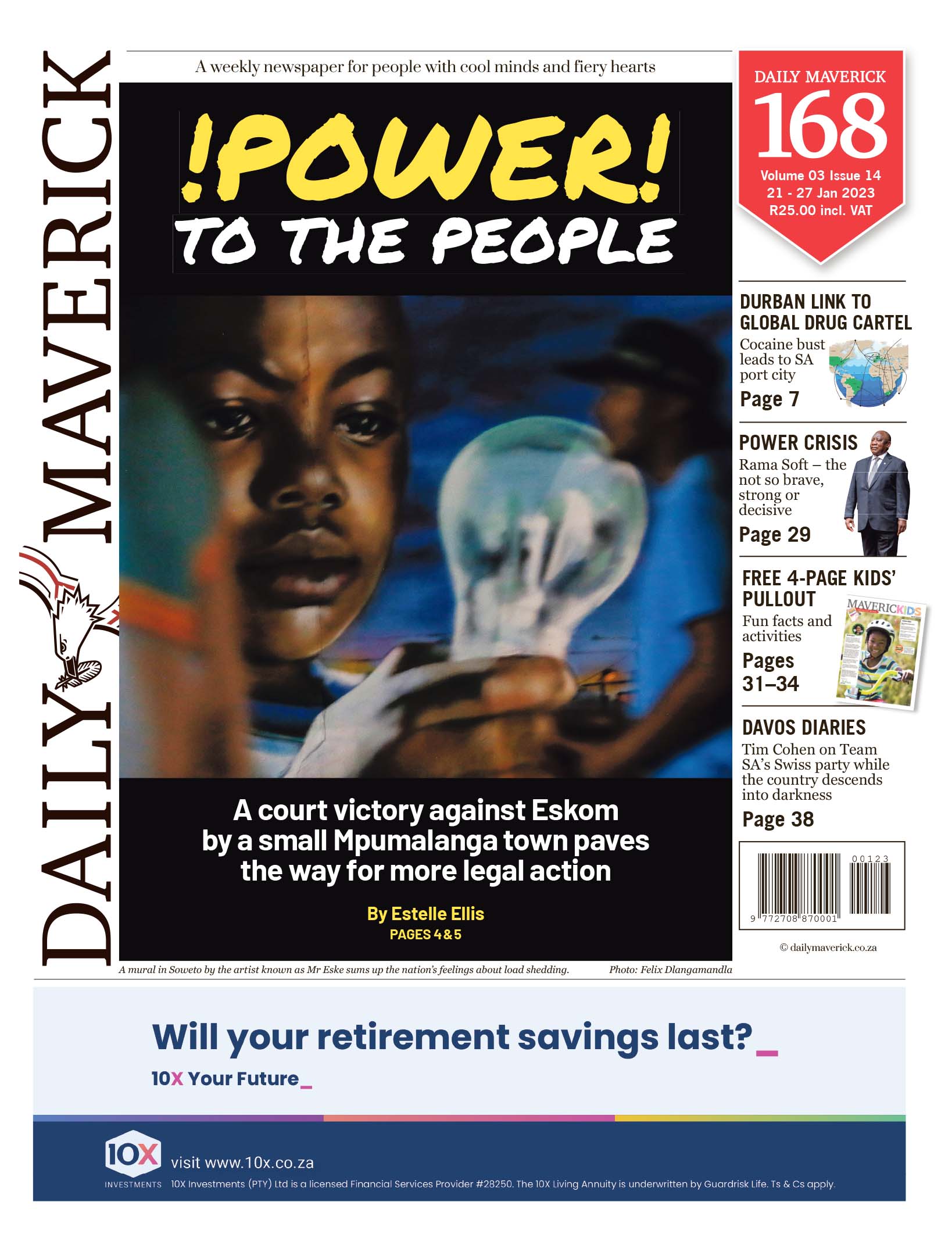