KC director makes many acclaimed films. This one might deliver her first Oscar nod

KC director makes many acclaimed films. This one might deliver her first Oscar nod

Filmmaker Sharon Liese stepped into the sprawling Eder Flag factory and immediately knew she would never look at an American flag the same way again.

“I hope other people will feel that way,” says Liese, who lives in Overland Park.

“We want people to not only think about how they have individually viewed the flag but to shift their own perspective … because it’s a huge continuum of how everyone views the flag.”

Liese’s new documentary, “The Flagmakers,” which she co-directed and produced, asks the question: Who is the American flag for? The project was produced by National Geographic Documentary Films and is streaming on Disney+ and Hulu. In December, it advanced as one of 15 movies eligible for an Oscar nomination in the documentary short film category. The Academy Award nominations will be announced on Tuesday.

“We do worry that when people hear the title ‘Flagmakers’ they think it’s just a rah-rah film, and then they may dismiss it before even considering it,” she says. “But America is not one-dimensional, and the people are not one-dimensional. There’s such diversity in America that we knew we needed to be committed to telling an ensemble story.”

Her film focuses on Eder Flag, a deep-rooted, employee-owned company in the Milwaukee metro that is the nation’s largest manufacturer of both flags and flagpoles. It produces more than 5 million U.S. flags per year. But the people who actually make them represent “a microcosm of the changing face of America,” she says.

The faces include sewing manager Radica, a Serbian immigrant whose relationship with her adoptive country is losing its luster; Iraq war survivor Ali, who is the target of a hate crime mere months into his arrival; conservative Midwesterner Barb, who supports both her co-workers and the right-wing politicians who don’t; and SugarRay, a Black local who, despite working around flags all day, refuses to fly one at home.

“This film is about people living their life and trying to find the American dream, but also about how we treat people in this country — whether you’re American-born or you came here as an immigrant,” Liese says. “And then there are the larger issues of what the flag means to various people, and potentially even how the flag has been co-opted by certain groups in America.” 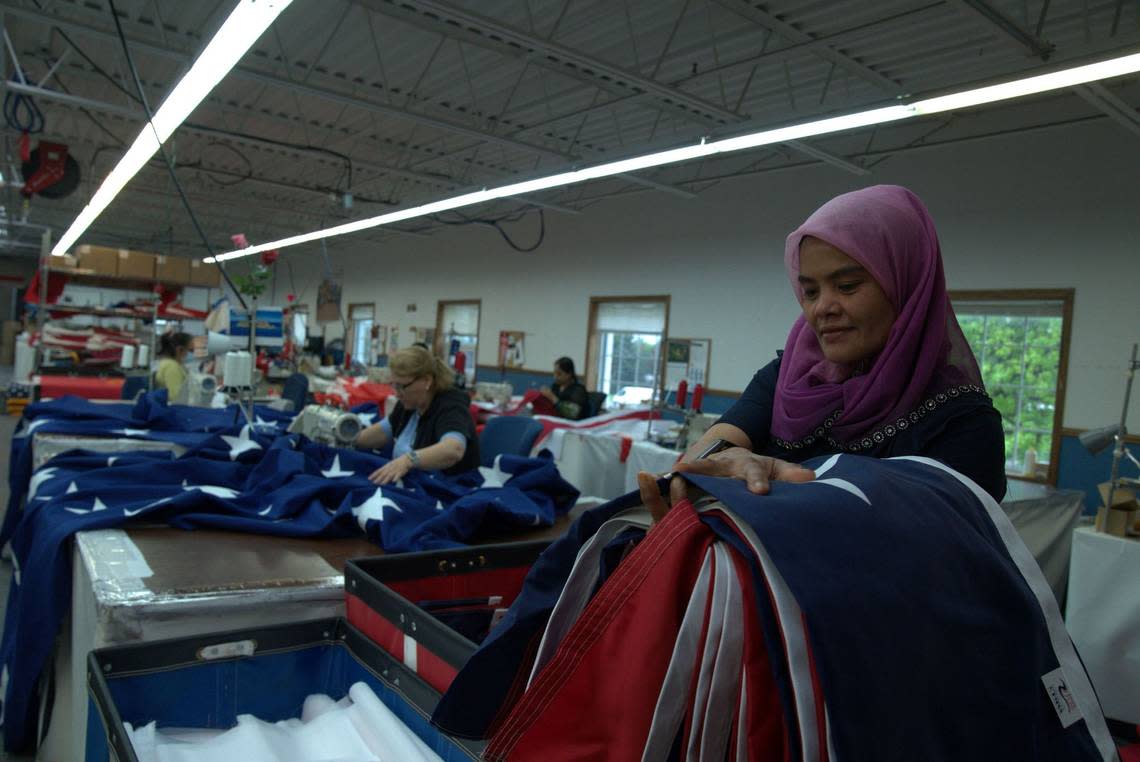 “The Flagmakers” spotlights the vast variety of workers sewing and folding flags at a Wisconsin company, including Evelia, Vasilika, Raheela and Hazarah.

Liese may be best known for her acclaimed work filmed in the Kansas City area: the HBO documentary “Transhood,” about four local transgender kids, and the CNN short “The Gnomist,” about little “gnome homes” along an Overland Park walking path. She also co-created the CBS series “Pink Collar Crimes,” which featured a Kansas City case.

With “The Flagmakers” in Wisconsin, she says each of the featured workers resonated with her.

“I’m probably furthest from the way Barb views things,” she says. “However, I couldn’t help but see her humanity. I don’t think she would even see this, but America failed her in a way when you consider her (declining) health and health care. It’s very interesting because she connected with so many people at the factory — and the feeling was mutual — though it kind of belies who she’s probably voting for and her political views.”

For SugarRay Kayde, the entire process of shooting the documentary and then watching himself onscreen proved surprising.

“You think to yourself, ‘Wow!’ All of that filming we did was really for something much bigger than you could have imagined at that time,” says Kayde, who describes himself as a Milwaukee native, husband and father of five.

“Also, working with people, you don’t always know their story or what they’ve been through. So seeing Radica and Ali and some of the hardships that were endured on their journeys was really eye-opening for me.”

The company’s inventory team leader mentions in the movie he doesn’t display a flag at his own house. What would need to happen for him to do so?

“Well, if I had the answer to that question, I might already have an American flag flying at my home. But I don’t and there’s not,” he says. “Maybe one day that will change but not currently.” 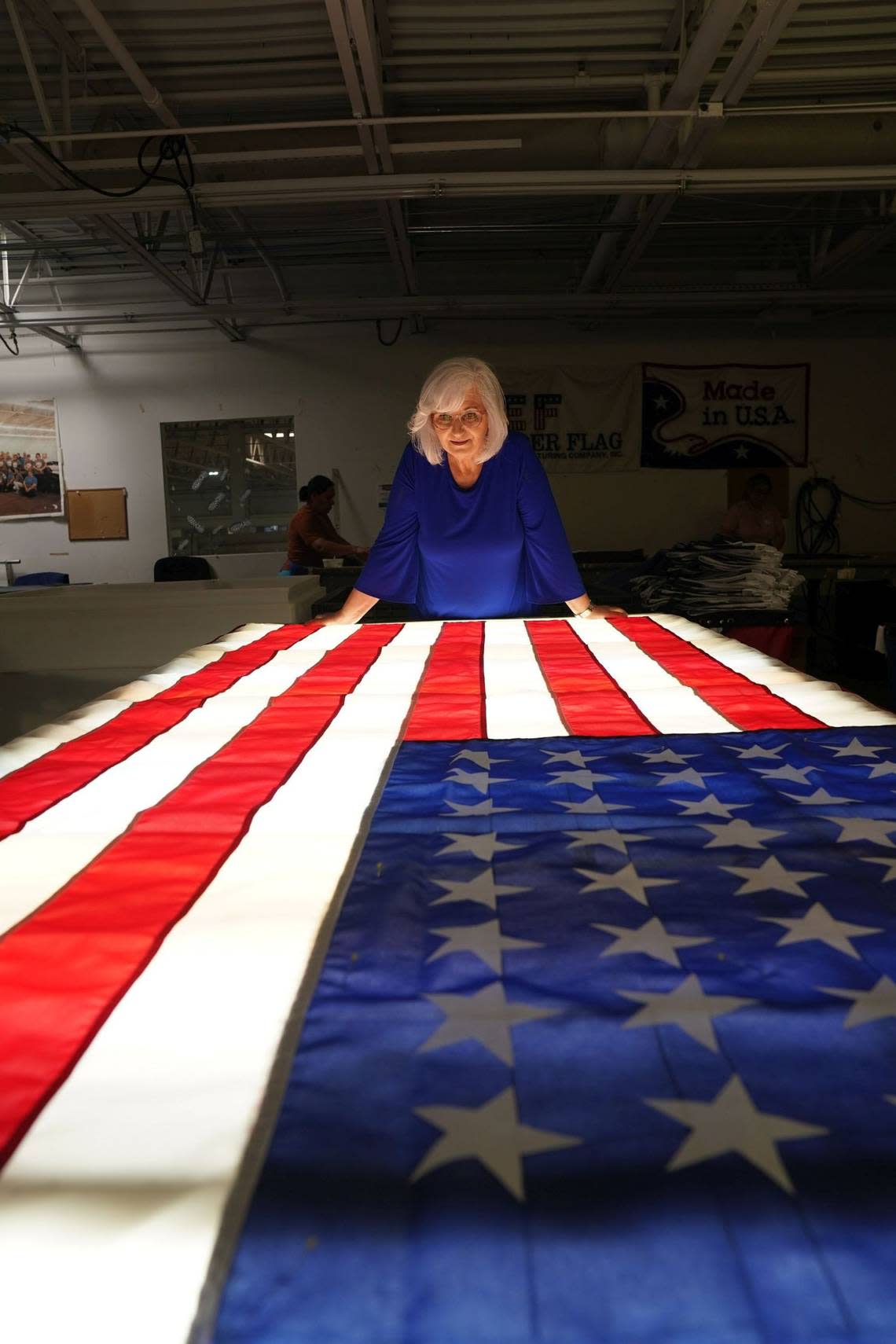 Among the workers featured in “The Flagmakers” is Radica, a sewing manager who moved to America from Serbia.

“I started following them, and at the end, one of the women went to work at a flag factory here in Kansas City. I was like, ‘That’s the film!’ But then we couldn’t gain access,” she says.

Instead, Liese and co-director Cynthia Wade searched nationwide and eventually found Eder Flag in Oak Creek, Wisconsin. They (along with several KC-based crew members) traveled frequently to the Badger State, shooting there from July 2019 to May 2022 — which meant filming became more problematic as the pandemic struck.

Wade recalls, “For many months, we either couldn’t get into the factory or if we did — after quarantining in Milwaukee for two full weeks — the employees were in masks/shields with plastic protectors, and the floors were zoned off so that employees couldn’t have conversations or take breaks together. Nothing was happening story-wise — and there was no cross-pollination to capture.”

Fortunately, once the factory opened back up and the pandemic eased, National Geographic was impressed enough with the footage to officially come onboard.

Liese admits working with her New York-based co-director presented its share of benefits and challenges.

“We believe it was the best way to make this particular film,” she says. “First of all, Cynthia and I are both really busy. So we could tag team, and I would go and do one shoot, and she would do another. We have different strengths and different interests, but we’re committed to hearing each other’s views.”

As for the possibility of “The Flagmakers” landing Liese her first Academy Award nomination, she says, “On a practical level, it opens so many doors for you, and it sort of offers legitimacy and credibility … that might not even be warranted.”

The doors have already opened for her collaborator Wade. She won an Oscar for her short documentary “Freeheld” in 2008 (which was adapted into a 2015 feature of the same name starring Julianne Moore, Elliot Page and Steve Carell). Wade was also nominated in the same category in 2013 for “Mondays at Racine.”

She has attended the Oscar ceremony twice.

“Tom Hanks saying to me, ‘Come on up, kiddo. It’s your moment’ in front of 40 million people live was an amazing, surreal, out-of-body experience. He sort of half-whispered it to me as I was ascending the stairs to the stage, so it felt like time had suspended,” says Wade, who confesses her Oscar statuette is hidden away because “it’s too much pressure to look at on a daily basis.” 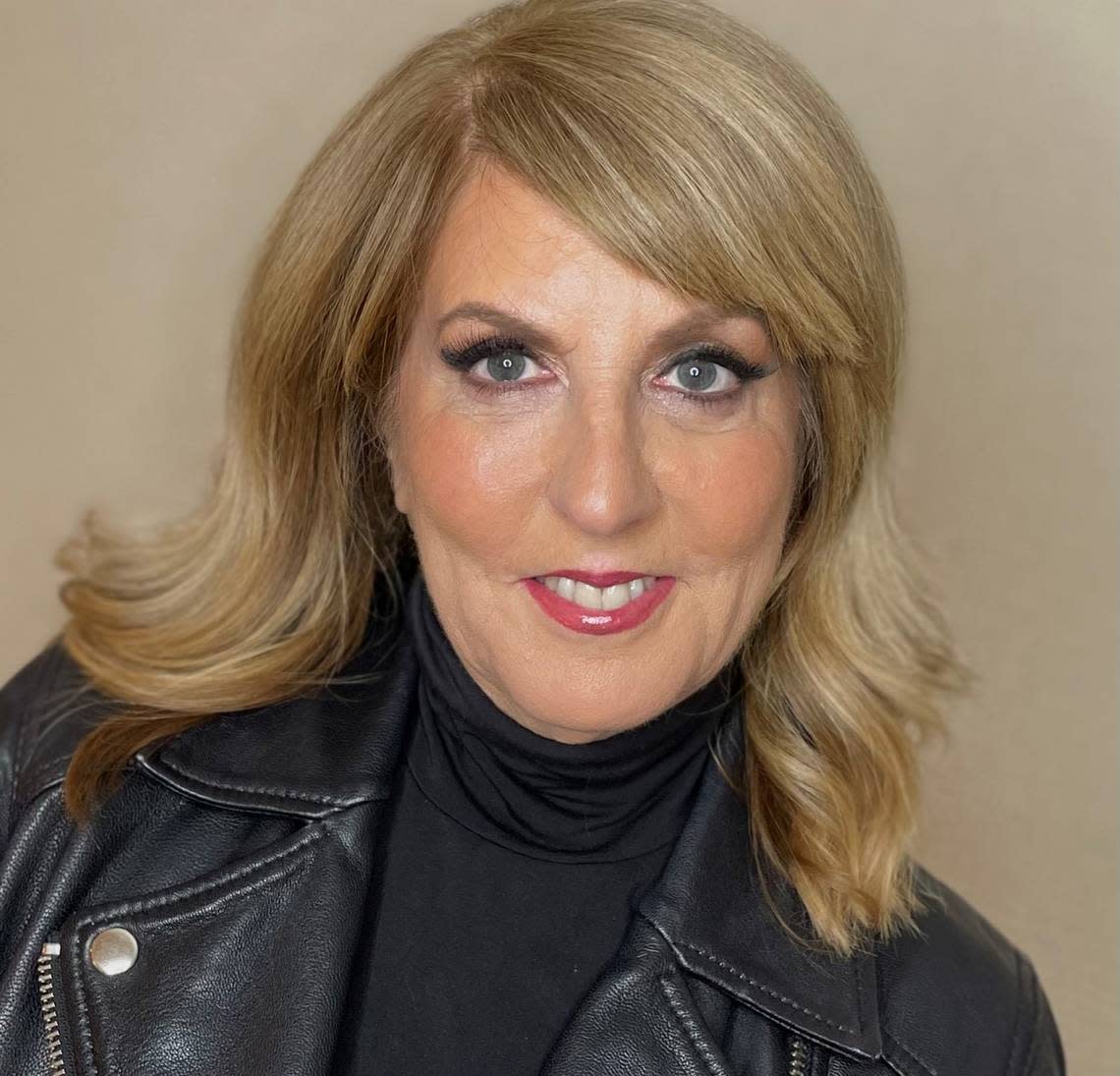 “This film is about people living their life and trying to find the American dream, but also about how we treat people in this country — whether you’re American-born or you came here as an immigrant,” says “The Flagmakers” director Sharon Liese, who lives in Overland Park.

“The Flagmakers” isn’t the only Liese project gaining awards buzz. Her short “Parker” (co-directed with KC journalist Catherine Hoffman), which explores the evolving nature of naming traditions in Black Kansas City families, is playing at the Sundance Film Festival this month. She’s also directing and executive producing a series for Starz about a group of women who’ve come forward in response to abuse by their church pastors.

“Many times when I’m at events and things associated with these movies, people ask, ‘Are you based in L.A. or New York?’ I enjoy answering that question, ‘No, I live in Kansas City.’ And people go, ‘Really?’ So it can be done from here. And I love being able to represent that way,” Liese says.

One thing “The Flagmakers” makes clear is that the word “represent” has all kinds of meanings when discussing the stars and stripes. (Interestingly, Eder also made Confederate flags for decades but stopped after the 2015 mass shooting at a Black church in Charleston, South Carolina.)

“I have some flags from (Eder), but I don’t have anything flying,” Liese says. “We hear a lot from viewers at screenings — and I feel this way — but you put a flag out and people think you’re saying something that you’re not saying. I feel that’s unfortunate. I do want to reclaim the flag.”

Kayde adds, “Every flag has a story, and it’s the story of the person or people who made that flag — and they don’t always look like what you may think. That’s part of the beauty of this country.”

Jon Niccum is a filmmaker, freelance writer and author of “The Worst Gig: From Psycho Fans to Stage Riots, Famous Musicians Tell All.” His new book titled “With Great Power: Leadership, Character and Conflict Beyond the Superhero Multiverse” comes out in September. 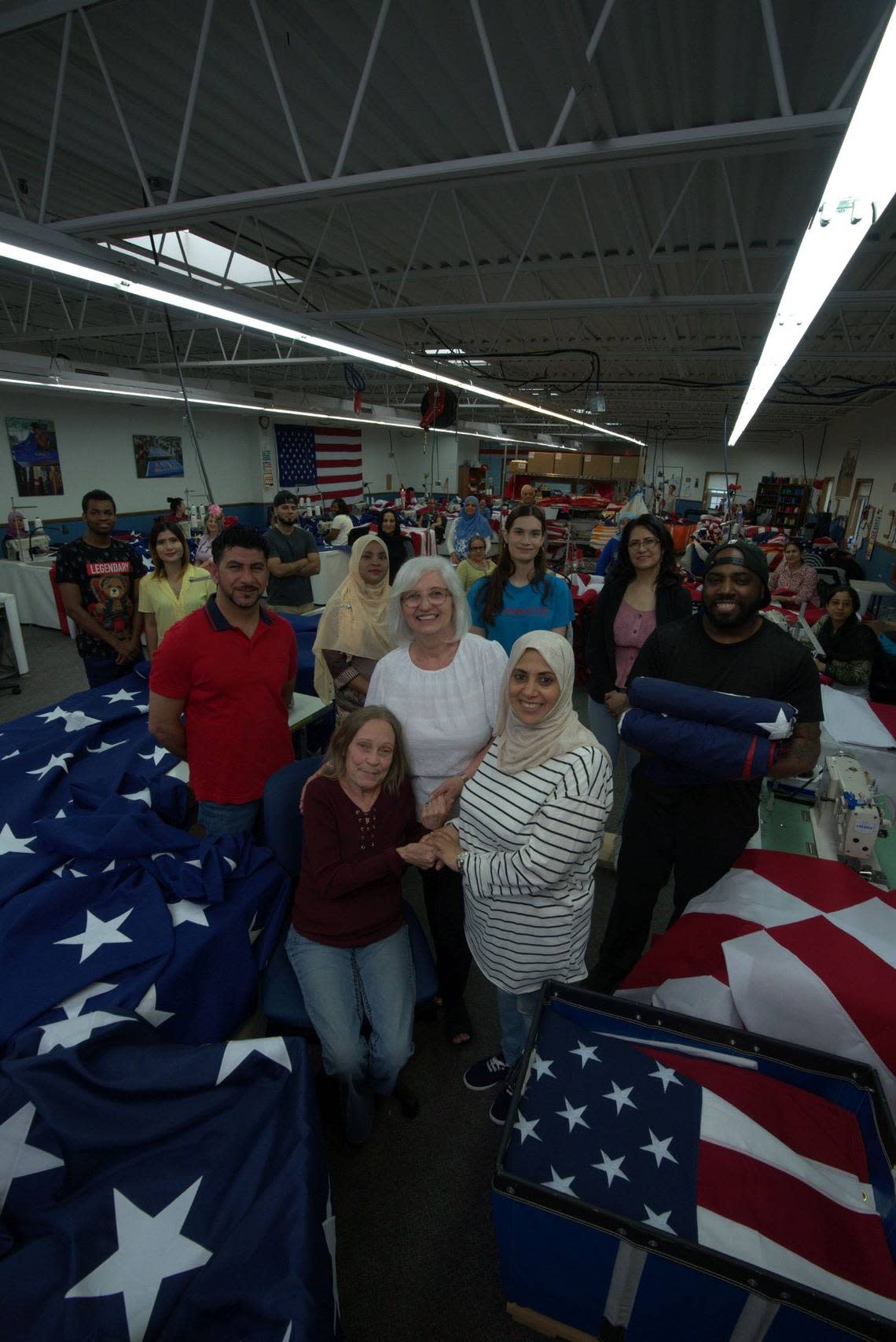