The inaugural edition of the ICC Under-19 Women’s T20 World Cup 2023 is set to commence on January 14 in South Africa, with the final scheduled for January 29.

The tournament that will see a total of 16 teams competing in the competition is expected to provide a boost to women’s cricket across the world. It’s been a long time coming. A viable platform for age-group cricketers in the women’s game will be a significant step in expanding the base of the pyramid.

“The inaugural Women’s U-19 World Cup is a hugely important tournament for the future of the game,” former India international Snehal Pradhan (who is now an administrator at ICC) had told Scroll.in in an interview. “And we’ve already seen, just the creation of that tournament has driven change in so many member countries, because now member countries are building their junior programmes. Now they have a clear pathway for which their junior programmes will aspire to. So that’s extremely exciting.”

“While the Women’s T20 World Cup has been played for several years now, the Under-19 event is a first-time event and one that holds a lot of promise,” Sachin Tendulkar wrote in the ICC column.

“I think this can transform the landscape, since a global platform will ensure great learning and experience to young women cricketers. Though women’s cricket has made huge strides, there are areas still to be tapped. What is required right now is a more robust grassroots system across the world. The larger we spread the base, the more talent we will unearth and that will have a direct bearing on the quality of the game.”

The United Arab Emirates, Rwanda, Scotland, Indonesia and the United States of America made it to the World Cup after competing in regional qualifier tournaments.

India, with established names like Shafali Verma (captain) and Richa Ghosh (wicketkeeper) in their ranks, start as one of the favourites. Australia, who have a number of players from the Women’s Big Bash League, are also strong contenders. England, too, have players with top-level experience.

Here’s a look at India’s squad:

The 16 teams competing have been divided into four groups. In the group stage, every team will play once each against the other three teams in its group. Then, the top three teams from each of the four groups will qualify for the Super Six round.

Finally, the top two teams from both groups will enter the semifinals, which will both be played on January 27 at the JB Marks Oval in Potchefstroom. The final will be held at the same venue on January 29.

The tournament will be played across four venues in Benoni and Potchefstroom.

Here’s a look at the four groups:

Here’s a look at the full schedule for the tournament: 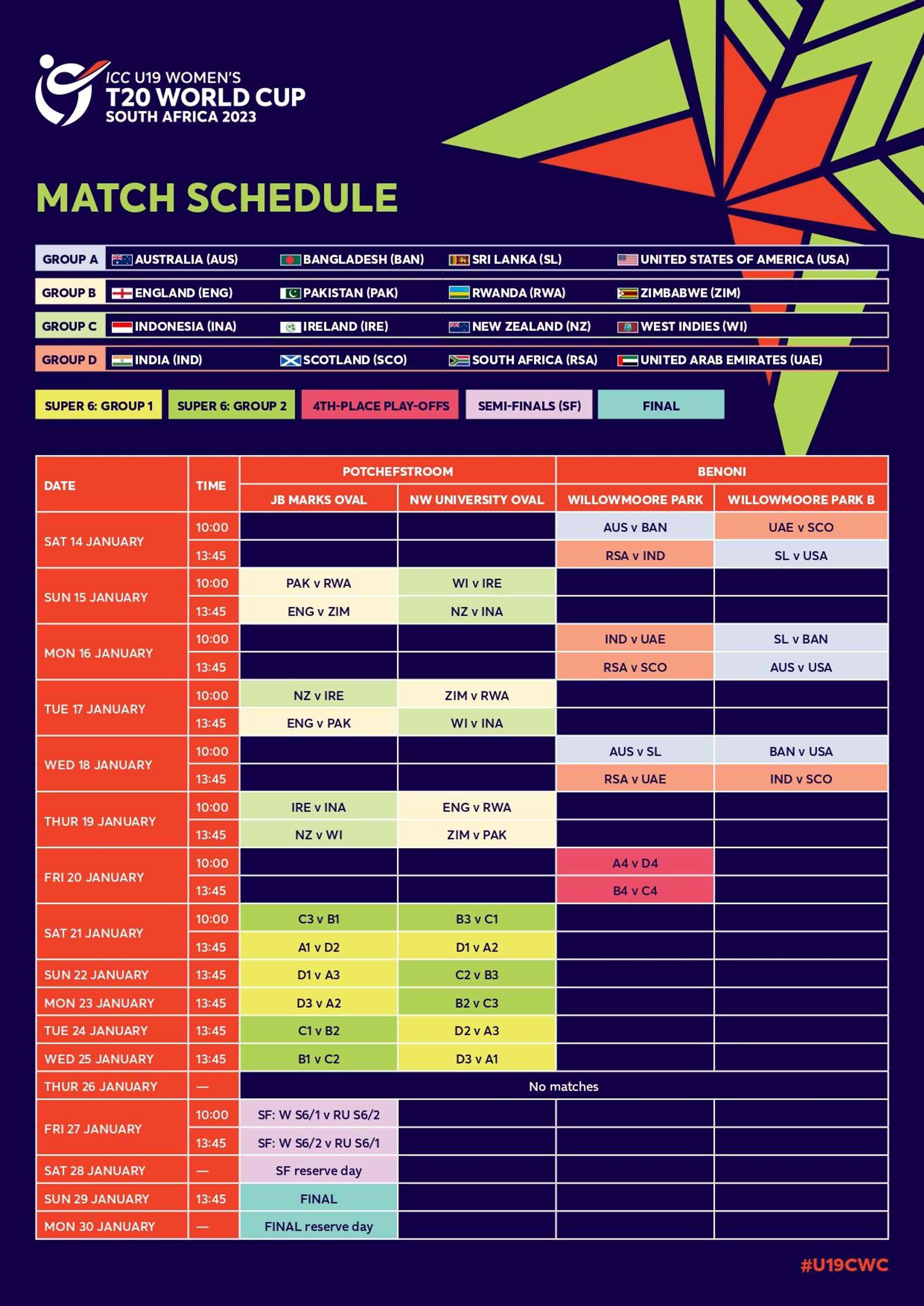 Group A all squads

Group B all squads

South Africa captain, Oluhle Siyo: “It feels like today has taken so long to get to, but we’re finally here. The World Cup has officially begun. It was so awesome to meet all of the captains during the captains’ photo, this tournament is going to be so much fun. As a team, we’re really excited to be hosts and to also play in our first-ever World Cup. We’ve worked hard to prepare for this moment and we just want to get started and show what we’re made of.”

Australia Captain, Rhys McKenna: “It was pretty cool being able to meet all the other captains and being able to see the trophy up close made me pretty itchy to get the win. It’s been a pretty hectic few days since we’ve gotten to South Africa, we’ve either been training or playing (warm-up) games or doing lots of talks but it’s been pretty good to get a look at the other teams. We’re excited for Saturday, definitely.

India captain, Shafali Verma: “Our first week of the U19 T20 World Cup has been really exciting and busy. We’ve done everything from training to warm-up games, to workshops about health and wellness, media and integrity. You can’t help but feel like you’re part of something new and historic. Today’s captains’ photo was definitely one of my standout moments of the build-up so far. It was such a festive atmosphere. We’re excited for our first match on Saturday.

UAE captain Theertha Satish: “Our first week in South Africa has been so amazing. We’ve been to so many new grounds, we’ve met so many new people. The experience has just been amazing and we’ve enjoyed it to the fullest. We got a good opportunity to meet big stars who have been there and done that and have shared very valuable information with us on how they have gone about their own World Cup experiences, we’re excited to put those lessons to action. Taking the photo with the other captains and getting to meet them and make new friends was probably one of my best highlights so far. We can’t wait for Saturday to finally arrive.

Star Sports, the ICC’s global broadcast partner, have licensed rights to international broadcasters for select matches, including FanCode in India.

ICC’s OTT platform, ICC.tv, will ensure live coverage of all matches across all global cricket markets.

India legend @M_Raj03 spent time with the Shafali Verma-led U19 squad ahead of their tournament opener on Saturday.

Among the commentators, Ananya Upendran is a contributor to Scroll.in and you can read her articles here.