Barcelona beat Real Sociedad 1-0 late afternoon today (25th) at the Camp Nou. The goal of the match was scored by Dembelé and the Catalan club had one more man for a good part of the game due to the expulsion of Méndez in the 40th minute of the first stage.

The match was valid for the quarterfinals of the Copa del Rey; With the victory, Barcelona advances to the semifinal and awaits a draw to find out who will be their opponent; Barça relied on Dembelé’s great performance throughout the match and was applauded when he was substituted. In the end Ter Stegen shone and avoided the rival’s tie.

In Catalonia, Jesus Manzano, the referee of the clash, is considered an enemy of Barcelona because of his history with the team. Despite this, Xavi has already commented that he has no problem with him.

Another fact is that Real Sociedad has not beaten Barcelona at the Camp Nou since the 90/91 season, when they won the match 3-1.

How was the game

The duel was dominated by Barcelona, ​​which created more opportunities. Sociedad managed to hold on until Méndez was expelled, still in the first half; The referee was heavily criticized and harassed by the home crowd; Even with one less, Real did not back down its players and continued in search of a tie, endangering the Catalan goal; Barcelona relied on Ter Stegen’s excellent saves to win in comfort.

Not worth! Lewandowski received a cross at the entrance to the small area, dominated and hit the goal. The ball deflected off De Jong before hitting the net. The assistant signaled the Dutchman’s irregular position – confirmed by VAR. However, the ball would probably go in even if it had not touched shirt number 21.

What a stick! Despite Barcelona having created more opportunities in the first half, Real Sociedad knew how to respond. After Balde’s mistake on the ball, Kubo received it from the left, looked for the bottom inside the area and finished cross, stamping the crossbar.

Straight red! Brais Méndez arrived late at Busquets, with the cleats on the Spaniard’s ankle, and initially received a yellow card. However, VAR called the referee to review the move. After the review, Jesus Manzano changed his marking and expelled the striker from Sociedad. 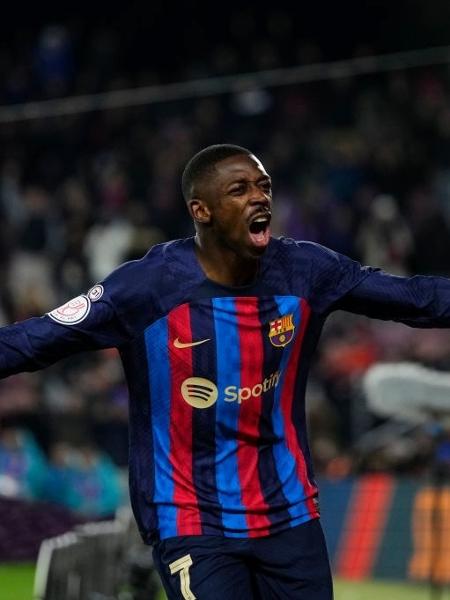 1 to 0. Striker Dembelé was launched on the right at speed, entered the area with space, went to the back and dropped a bomb. Remiro tried to save, but the ball went into the small space between the goalkeeper and the crossbar. Nice goal from the Frenchman!

Unbelievable! Even with one less, Real Sociedad managed to create an incredible opportunity. Kubo took advantage of the space on the left, escaped the marking and made the low cross finding Sortloth completely free in the small area. The attacker reached under the crossbar and with the goal wide open to tie the match, but he mishandled the ball and sent it over the crossbar.

Defend! Ter Stegen came out playing poorly and handed the ball to Zubimendi’s foot. Navarro received from the midfielder, face to face with the goalkeeper, and hit taking the German. However, the goalkeeper redeemed himself and made a miracle by defending with his left arm. On the rebound, Olasagasti sent the net through the outside.