Australia's T20I future: who has stood out from the BBL?

Australia's T20I future: who has stood out from the BBL?

The BBL's regular season is complete with a number of players making claims to be considered for the next time Australia pick a T20 squad later in the year after their disappointing home World Cup. There will be another BBL before the 2024 T20 World Cup, but here are eight players who have made their mark.

Smith scored the ninth-most runs in the regular season. He hit the most sixes and had the highest strike-rate. He smashed two of the four centuries.

All of that mayhem was achieved in a whirlwind of just four matches as Smith lit a fuse under the BBL. He made a big statement to critics and selectors after he was on the outer during Australia's failed T20 World Cup title defence.

Smith was effectively replaced by big-hitter Tim David in Australia's middle-order as selectors sought a high-voltage approach. It was widely deemed that Smith didn't have the necessary firepower for the format, but he's made critics look rather foolish during an absolute purple patch marked by brutal hitting.

In just a handful of BBL games, where he became just the second player in its history to hit consecutive centuries, Smith changed his entire T20 perception and made a compelling case to open for Australia when they next play in the format.

Short arguably played the best innings of the tournament with a blistering century off 59 balls to lead Strikers to a record chase down of 230 against Hurricanes.

Underlining his belligerence, Short held his own whenever he batted alongside Chris Lynn as he impressively backed up his breakout season last year. He finished as the leading run scorer of the competition.

Short is very much in the mould of modern T20 players who can do a little bit of everything with his accurate offspin often used in the powerplay, while he also has a knack of pulling off spectacular catches.

When Travis Head and Peter Siddle were sidelined, Short was made stand-in skipper underlining his standing within Strikers and his burgeoning leadership capabilities. Uncapped at international level, Short looms as an intriguing option for national selectors. 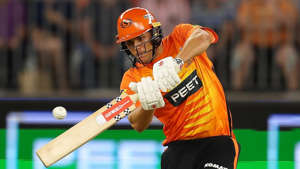 Heading into the BBL season, there was a lot of expectation over emerging allrounder Aaron Hardie, whose stellar performances in the Sheffield Shield have him bandied around as a potential Test player.

He had been on the fringes of Perth Scorchers' powerful line-up in recent years, but a breakout season was tipped as Hardie effectively replaced injured allrounder Mitchell Marsh.

The 24-year-old Hardie has stepped into Marsh's sizeable shoes seamlessly, starting off with a maiden BBL half-century in Scorchers' season-opener against Sixers while batting at No. 6.

With the departures of openers Faf du Plessis and Adam Lyth, a reshuffled Scorchers batting order saw Hardie move to No. 3 - the position Marsh once occupied with such force - and he has made it his own with a trio of half-centuries.

A groin niggle has mostly kept Hardie away from bowling duties, but he is a sharp seamer and in the mould of WA team-mate Cameron Green. It's only a matter of time before Hardie makes his international debut.

Ahead of the BBL season, Inglis told ESPNcricinfo that he loves nothing more than batting aggressively. He demonstrated that with cavalier batting at No.4 to help banish the disappointment of missing out on Australia's T20 World Cup campaign after a freak golf accident.

Inglis in previous seasons has unleashed his broad range of strokes as an opener, but was moved down to help balance a new-look Scorchers batting order.

Inglis has shown off his versatility, which has helped him force into Australia's team having made his ODI and T20I debuts last year. He's also an accomplished wicketkeeper and snared several athletic catches this season to underline why he's the obvious successor to Matthew Wade in Australia's T20 team.

Mark Waugh has sounded like a broken record on the Fox Sports broadcast advocating for Sutherland to be promoted up the order. But his continual plea has merit with the powerful Sutherland seemingly wasted as he mostly came to the crease at the death.

The 23-year-old Sutherland has been earmarked in the 'finisher role' and it's easy to see why with his ability to clear the boundaries. His strike-rate of 156.5 is second only to Smith and David.

There is a lot to like about Sutherland, who can also bowl quickly and is a superb fielder as he memorably showed with an athletic one-handed catch running back from mid-off to dismiss Scorchers batter Nick Hobson. A taste of international cricket could happen sooner rather than later for him.

Abbott has once again been a consistent performer in the BBL, where he finished the regular season as its leading wicket taker. Australia are blessed with pace options, but Abbott continues to put no foot wrong and remains on the fringes of the national team in white ball cricket.

His handy batting hasn't been greatly required this season, but might be needed in the BBL finals series as Abbott eyes leading Sixers to another title. 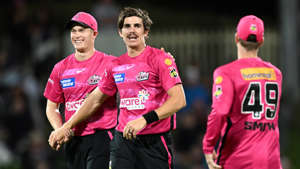 Heading into the BBL, Richardson was the forgotten quick in Australia's stacked pace stocks. A nagging heel injury saw him on the sidelines for an extended period and meant he wasn't considered for selection as the Test summer began.

But Richardson spectacularly issued a reminder with a stunning start to the BBL, where he picked up 15 wickets in just seven matches marked by rapid bowling nudging 150kmh.

Unfortunately, his injury-plagued season continued when he suffered a hamstring injury against Sydney Thunder on January 4 and he hasn't been sighted since. Richardson is expected to be fit for Saturday's qualifying final between Scorchers and Sixers and he will hope to pick up where he left off from.

Having played one game last season as a Covid-19 replacement player for Brisbane Heat, Dooley has been a revelation with his unorthodox action - described as the bowling equivalent of a windmill - bamboozling a slew of batters.

He took 19 wickets in just 10 games and bowled particularly accurately. With his effervescent personality to boot, Dooley, who is a lawyer in his day job, became a fan favourite and could be an intriguing option for the T20 World Cup, where surfaces in the Caribbean are often slow and favour spin.