Alberta premier orders review after CBC reports of emails over Coutts cases between her office, prosecution

Alberta premier orders review after CBC reports of emails over Coutts cases between her office, prosecution

Alberta Premier Danielle Smith said she has called for a review that she says will examine emails between her office and Crown prosecutors.

Smith said Saturday — on Corus Entertainment's Your Province, Your Premier radio program — that she has ordered the independent public service to do a review of emails sent by her office, which will be conducted alongside the IT department.

CBC previously reported that a staffer in Smith's office sent a series of emails to the Alberta Crown Prosecution Service, challenging prosecutors' assessment and direction on cases stemming from the Coutts border blockades and protests.

The emails were sent last fall, according to sources whom CBC has agreed not to identify because they fear they could lose their jobs. CBC has not seen the emails.

Smith said there are hundreds of Crown prosecutors and she has 34 staffers in her office, which means it is likely the review will take the entire weekend.

"As soon as we see if the emails exist, then we'll make sure that we have a presentation to the public. We'll know next week," Smith said.

The premier also confirmed that she had called an emergency caucus meeting to take place Saturday.

"I want my caucus to understand the nature of the story," she said. 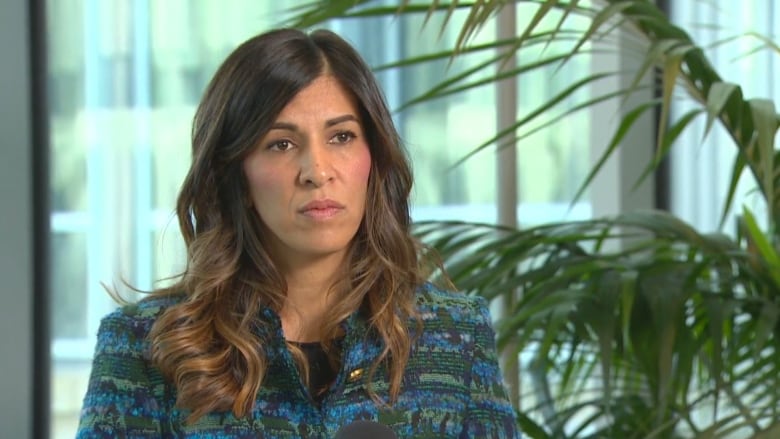 Alberta NDP MLA Rakhi Pancholi has called for an independent investigation into emails sent from the premier's office to the Crown prosecution's office. (CBC News)

Last week, Smith's office issued a statement saying she used "imprecise" language after two instances when she said she had contacted Crown prosecutors — once during an on-camera interview with Rebel News, and a second time during a press conference in Edmonton.

At that time, the premier's office said that she had actually contacted Attorney General Tyler Shandro and the deputy attorney general, and denied contacting Crown prosecutors.

On Saturday Smith said that during her leadership campaign she had many people ask her if there was an avenue for amnesty for people who had violated COVID-19 public health orders.

"I probably used imprecise language, but all of my dealings with the department have been appropriate and it's been through the Attorney General and department officials."

Alberta NDP MLA Rakhi Pancholi issued a statement following Smith's comments, saying that Smith is "hiding the truth behind IT processes and a caucus presentation meant to shore up her chaotic leadership."

"If Danielle Smith doesn't know what the staff in her office are doing, she shouldn't be premier," Pancholi wrote in the emailed statement.

"These allegations are extremely serious and yet, her story keeps changing. Albertans know the UCP cannot be trusted to investigate themselves."

Duane Bratt, a political scientist at Mount Royal University in Calgary, said the emergency caucus meeting taking place Saturday could be an attempt to "smooth the waters" with caucus.

He said emergency meetings of this type on a Saturday are rare.

"The reason that this is significant is we have video of Danielle Smith … saying that she had contacted Crown prosecutors about COVID cases," Bratt said.

"There's a lot of questions about what did the premier know, when did she know it? And just the relationship between the Government of Alberta and Crown prosecutors as it relates to COVID."

He said he thinks Smith is working to reassure caucus that appropriate action will be taken.

"We don't really know what the state of caucus relations is."